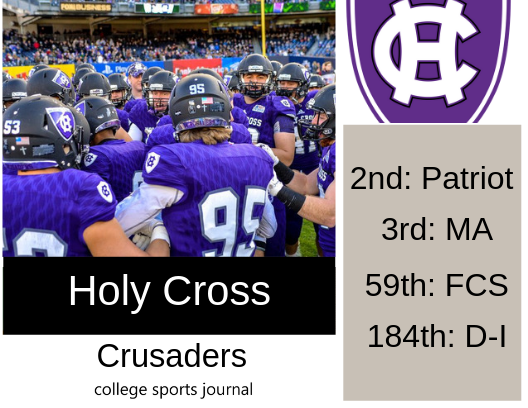 2018 In A Sentence: After a 1-6 start with an absolutely brutal out-of-conference schedule and an unfortunate loss to Colgate to start the season, Holy Cross under new head coach Bob Chesney ended the season on a 4 game winning streak to close promisingly at 5-6.

Biggest Shoes to Fill: When QB Geoff Wade cut down on his mistakes in the second half of the season, the Crusaders were a vastly improved football team. His 1,844 yards passing and 16 TD passes will need to be replaced by an unknown signalcaller to start the year, but it’s unfortunate that he graduates just as it seemed like things were finally clicking for him offensively.

Key Player: Perhaps not coincidentally, when Wade started cutting down on his mistakes, 5’9. 175 lb RB Domenic Cozier started to emerge as a star in the Holy Cross backfield. He led the team in rushing with 643 yards, but most of his damage came in Patriot League play, where he shredded Harvard, Lehigh, and Lafayette during a 3 game stretch. Key for Cozier is delivering the consistency of that three-game stretch every week duing his senior campaign.

Fearless Prediction: Like last year, Holy Cross starts the year with a brutal four game stretch. This time the Crusaders are facing four near-certain defeats at the hands of Navy, New Hampshire, Yale and Syracuse. If they can survive that without getting too banged up, even with an 0-4 record in those early games Holy Cross has to still seriously be considered a title contender in a seriously weak Patriot League. A two week stretch against Colgate on October 26th and at Lehigh on November 3rd will likely determine whether they are contenders or pretenders.