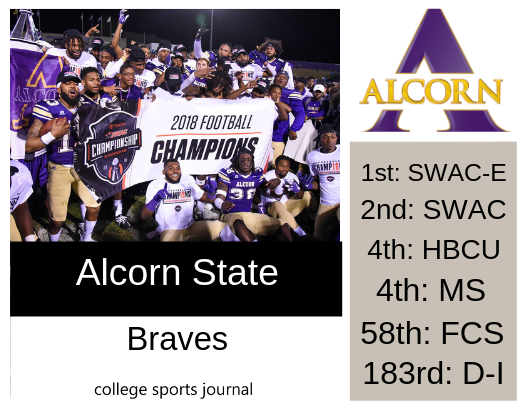 2018 In A Sentence: Alcorn State’s consistency allowed Fred McNair‘s squad to capture their third SWAC Championship in the last five years, capping off the SWAC season with a 37-28 win over Southern in the championship game. The Braves were a controversial 2-point conversion away from tying the eventual Celebration Bowl Champion North Carolina A&T, falling 24-22.

Biggest Shoes to Fill: DT Sterling Shippy was a big part of Alcorn State’s stifling defense with 14 1/2 tackles for loss and 18 sacks. The Braves return a whole lot on both sides of the ball, but Shippy might be one of those players that might be missed more than people realize.

Key Player: RB De’Shawn Waller didn’t get the looks coming out of Hutchinson CC that other junior college transfers got – perhaps it was his size, 5’11. But Alcorn State wasn’t fooled for a second about this hard-running tank. Waller ended up being the SWAC Newcomer of the Year based on his 1,206 yard, 13 TD performance last year. Opposing SWAC defensive coordinators will have to attempt to devise new and unusual ways of stopping him – can he build on his success?

Fearless Prediction: By a pretty wide margin, Alcorn is favored to win SWAC East, with their only realistic competition Jackson State. The question then becomes whether Southern has finally caught the Braves. In any case, Braves fans have to be thinking that back-to-back-SWAC-champs has to be a realistic goal – not to mention the Celebration Bowl.