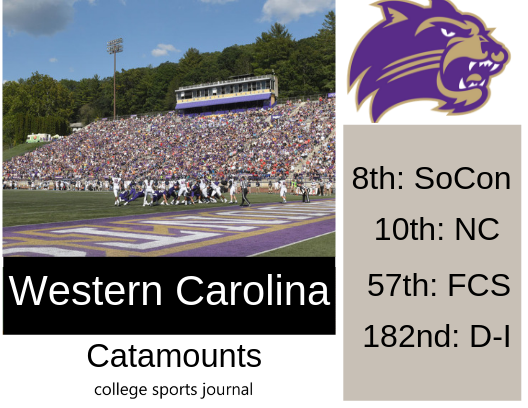 2018 In A Sentence:Western Carolina started the 2018 season with three straight wins, but it was all downhill from there as the Catamounts lost their last 8 games of the season. Defense was a problem for them as they allowed at least 38 points in eight games.

Biggest Shoes to Fill:When a big play was needed in the pass game, Tyrie Adams would look for his field stretcher, WR Jordan Mathis. Mathis led the Catamounts with 15.8 yards per reception over his 38 catches in 2018.

Key Player: QB Tyrie Adams is as dynamic a playmaker as there is in the FCS. Adams is the active leader in total offense at 9,389 total yards. In 2018, Adams combined for 3,423 yards of total offense – 2,417 yards passing and 1,006 yards rushing – scoring 26 total touchdowns. Adams has always decreased his interception total in each of his three seasons. He is poised for a huge senior season and should be on the Payton Award watch list during the season.

Fearless Prediction: Western Carolina will get a huge season from its excellent quarterback, but the offense wont be able to get up with the points that the poor defense allows week after week. Another losing record is in store for the Catamounts.