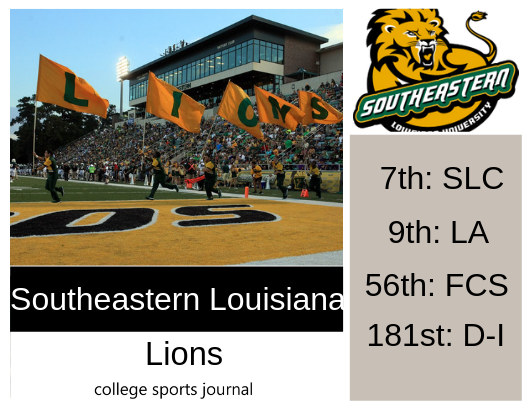 2018 In a Sentence: Southeastern Louisiana went 4-7 in 2018 and were competitive in a number of games, but had a hard time getting the defense off the field to hold leads or complete comebacks.

Biggest Shoes to Fill: QB Chason Virgil had a huge yardage year in 2018, throwing for 3034 yards. However, Virgil threw 13 interceptions to go along with his 17 touchdown passes. The offense is going to need all of the production they can get, so its key that Virgil protects the ball better in 2019. Giving the opponent extra possessions will be a death knell to the Lions.

Key Player: QB Jordan Hoy was named as the Southland’s Co-Newcomer of the Year a season ago after replaceing injuried and now departed Darrel Colbert, Jr. A transfer from FBS Old Dominion, Hoy led Lamar to back-to-back road wins late in the season, and was named the conference’s offensive player of the week on both occasions. Hoy piled up 692 yards of total offense and seven touchdowns during those two games. He played sparingly in the season finale against McNeese, although it was Colbert who drove the Cardinals on a game-winning touchdown drive in the fourth quarter. Now a senior, Hoy will be the key to the success for the Cardinals to see if they can duplicate another playoff run.

Fearless Prediction: The top of the Southland Conference really seems to be separating itself from the bottom. Unfortunately for Southeastern Louisiana, they are one of the teams at the bottom and will remain there this year.