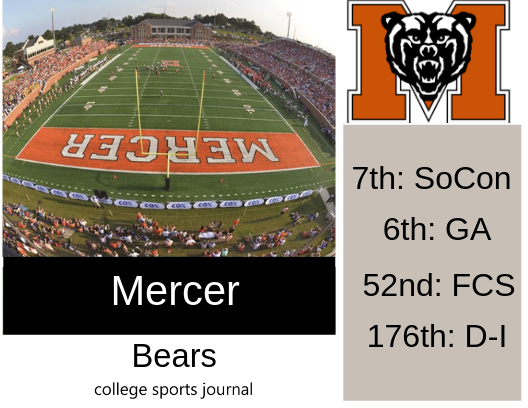 2018 In A Sentence: Outside of an upset win over a struggling Samford team, Mercer won the games they were favored in and lost the games where they were an underdog. That added up to a 5-6 record with a 4-4 Southern Conference mark.

Biggest Shoes to Fill: WR Marquise Irvin was the Bears top receiver in 2018 and will be missed in the passing game in 2019, especially without a clear cut starting quarterback.

Key Player: Mercer returns its leading rusher from 2018, RB Tyray Devezin. Last year, Devezin ran for 926 yards with 5.6 yards per carry. Only a Junior, Devezin should sail past 1000 yards this season in support of his offense. He can move the chains for the Bears to keep the offense on the field.

Fearless Prediction: There seems to be a clear line between the top and bottom of the Southern Conference. Mercer is one of those teams looking to climb in to the top half and fight for a playoff berth, but this year they will remain in the bottom half.