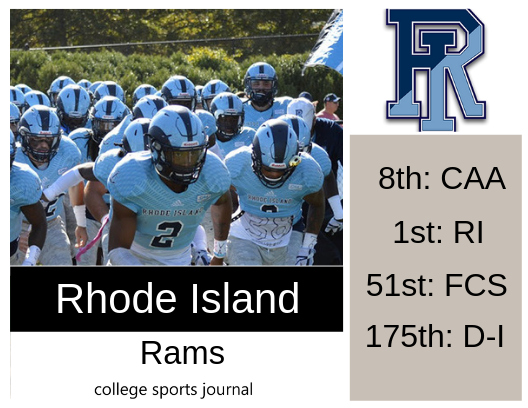 2018 In A Sentence: Rhode Island was one of the early surprises of the FCS season 2018, starting 5-1 and taking FBS UConn to the limit before losing 56-49. The Rams offense fired on all cylinders, and even kept pace when QB JaJuan Lawson went down to injury.

Biggest Shoes to Fill: QB JaJuan Lawson got out to a fast start for Rhode Island in 2018 before a knee injury sidelined him for five games. In just seven games, Lawson threw for 1728 yards – 247 per game – with 17 touchdowns and only 5 nterceptions. The quarterback reins will be passed to QB Vito Priore in 2019. Priore performed admirably in relief of Lawson in 2018. Key Player: WR Aaron Parker was one of the most dangerous receivers in the CAA in 2018, amassing 972 yards on 61 catches with 10 touchdowns. Parker is looking to have a huge senior season and has the potential to have over 1000 yards receiving.

Fearless Prediction: Rhode Island made a jump in 2018 with a winning record. 2019 looks to be about the same for Rhody with a new quarterback at the helm.