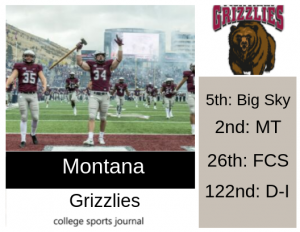 2018 In A Sentence: The Griz still missed the playoffs, but made improvements on both sides of the ball. QB Dalton Sneed and the offense did well at moving the ball, but the turnovers were costly for them. Dante Olson made a huge splash in the Big Sky and the FCS as a defensive nightmare for opposing teams. Squeaking out a win over then 13th ranked UNI, humbling Idaho on their FCS transition, and destroying both Southern Utah and Drake were positive steps forward. Western Illinois, Portland State, and Montana State game films will provide necessary insights into how the Griz can scratch their way into the playoffs.

Biggest Shoes to Fill: Josh Buss was a pivotal linebacker for the Griz. While the Griz have a stacked linebacker core and have done well on defense, Josh Buss is the most talented player they lose. Buss had 75 tackles, 9 TFL, 5.5 sacks, an interception, 3 pass breakups, and 3 forced fumbles. Montana did have a top five Big Sky defense, but the amount of points given up stretched both sides of the ball thin.

Key Player: Dante Olson is one of the defensive player of the year nominees as a truly dominant player in the FCS. Olson is rivaled by few in talent, production, and pure ball tracking ability. The pass defense will need to step up as it was ninth in the Big Sky last season, but Dante can continue to lockdown the run game from his position. It will be all eyes on him and Jabril Cox to see who will prove to be the supreme defender.

Fearless Prediction: Montana continues to improve under Coach Hauck despite a plateau in wins. The Griz seem to be revived in many Montana faithful’s eyes, but can they win the Brawl of the Wild? The scheduling crew did a great job at Montana to set up a diverse docket for them to traverse. However, Montana’s schedule is fairly daunting, as the play styles and level of teams are varied. If they navigate their tricky schedule well, Montana could be a fringe playoff team with dangerous experience. Two games with South Dakota and North Alabama should tune up the offense and awaken the defense. The following week will be a “TV” week as the Griz go to Oregon more to be on TV and take home a check rather than win a game. Monmouth will be an interesting contest as wellm as the improved Hawks were a Big South runner-up and just missed the FCS playoffs last year as well. As for conference play, the Griz will likely split their challenging Big Sky slate of EWU, UC Davis, Weber State, and Montana State. If Montana goes 3-1 in non-conference and 4-4 in conference a fringe playoff spot might be theirs to steal.