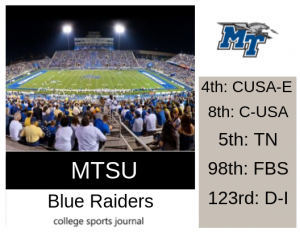 2018 In a Sentence: The Blue Raiders won their first division title and came within a late score of the C-USA championship to UAB but were blown out by Appalachian State in the New Orleans Bowal to finish 8-6 overall, 7-1 C-USA.

Biggest Shoes to Fill: QB Brent Stockstill, son of MTSU’s Coach Rick Stockstill, closed out his career as the 28th greatest passer in college football history – at least in terms of yards. He also holds MTSU records for Blue Raiders’ all-time leader in passing yards (12,495), touchdown passes (106), 300-yard passing games (19), 400-yard passing games (3), and passing yards per game (277.7). He signed on to be an assisant coach at Florida Atlantic after giving the NFL a brief try.

Key Player: WR/KR Ty Lee was the team’s leading receiver has 213 grabs for 2,537 yards and 21 touchdowns as a three-year starter, and now he has to do even more in his senior seasn. Although small in stature (5’9″), he is usually the fatest player on the field so is good also at the kick and punt return game. As a receiver, he will need to be solid target for whomever the new quarterback, which is a three player battle between sophomores Asher O’Hara and Chase Cunningham and JUCO transfer Randall Johnson.

Fearless Prediction: This year’s team looks like it could take a sizeable dip in the win total with 14 starters gone from the group that got to the C-USA title game. But the dip should not be so drastic to miss a bowl game even though the schedule looks very daunting with road games at the Big 10’s Michigan and Iowa to start the season. While MTSU will start slow, look for the Blue Raiders to earn a fifth straight bowl bid.