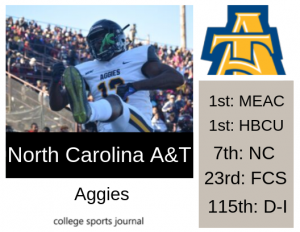 2018 In A Sentence: The Aggies had impressive wins against Jacksonville State and FBS foe East Carolina, along with a couple of head scratching losses to Morgan State and Florida A&M. They won the Celebration Bowl, but I feel like most fans feel like they could have gone undefeated.

Biggest Shoes to Fill: QB Lamar Raynard has been the engine that has helped keep this A&T ship of dominance in the HBCU landscape going for the last 4 years. Whomever takes over at quarterback for the Aggies will have some big shoes to fill.

Key Player: Whomever wins the quarterback starting role. It’s sounds like a lazy and cliché answer, but it’s true. Backup veteran QB Kylil Carter has already shown he’s a more than capable quarterback, coming in and securing A&T’s win over ECU in 2018 when Raynard went down, and former 3 star recruit QB Ifedi Kingsley will look to prove why he was worthy of the hype after transferring from ECU. They will have a stable corps of receivers, including possibly the best receiver in the MEAC in Elijah Bell, along with their second leading rusher from last season. If one of these gentlemen can get the ball to these playmakers in an efficient way, the Aggies won’t miss a step.

Fearless Prediction: North Carolina A&T will be in the Celebration Bowl once again – this time, however, coming in 2nd in the MEAC standings. (Since FAMU is on a self-instituted post season ban, A&T will get the nod.) I honestly don’t expect the Aggies to miss a step this year so long as quarterback play is consistent, I would not be surprised if they had another double digit winning season on their hands.