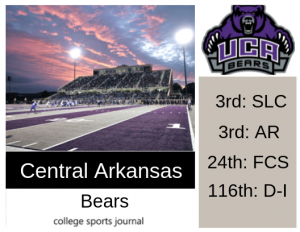 2018 In a Sentence: Central Arkansas started the 2018 campaign 5-2 and looked to be on their way to defending their Southland title. Then the wheels fell off, and the Bears lost three straight games to seal their fate as a team that would miss the playoffs.

Biggest Shoes to Fill: WR Jakari Dillard was the Bears’ big play man in their offense. Dillard averaged 20 yards per catch and scored eight touchdowns in his senior year. His ability to take the top off the defense helped open up the underneath routes for Lester Wells, who also graduated. The Bears have some targets to replace to return to the top of the Southland Conference.

Key Player: Whether they go with QB Luke Hales or QB Breylin Smith, Central Arkansas has a solid signal caller to work with in the 2019 season. Smith and Hales are both sophomores. Smith played to start the season in 2019 and Hales came in midway through. Smith was the more accurate of the two quarterbacks, but Hales got more production during his time on the field. Coach Nathan Brown has an interesting decision in front of him.

Fearless Prediction: The Bears are looking to regain their post as the top team in the Southland Conference. The offense should be there, but the defense is going to have to avoid the big play that cost them so many times last year.