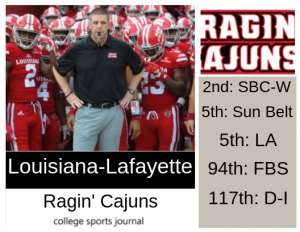 2018 In a Sentence: The Ragin’ Cajuns averaged 32 points and 424 yards per game in Coach Billy Napier‘s first season in Lafayette and finished 7-5 in the regular season with a bid to the first ever Sun Belt Conference title game (loss to Appalachian State) and a Cure Bowl bid (loss to Tulane).

Biggest Shoes to Fill: QB Andre Nunez is lost after throwing for 2,272 yards and 20 touchdowns last year. While the stats are not over the top, his leadership on the offense was the key to a solid offense last year. Levi Lewis looking to be his replacement and did have some action last year in the back-up role. He threw for 585 passing yards and seven scores in limited time.

Key Player: RB Trey Rogas and RB Elijah Mitchell may be the most dynamic duo in the Ragas came up with 25 catches and two scores and ran for a team-high 1,181 yards and eight scores, working in the rotation with Mitchell, who averaged 6.7 yards per carry with 977 yards and 13 scores and caught 20 passes with three touchdowns. This duo should help the new QB Lewis into action.

Fearless Prediction: The Ragin’ Cajuns should have a better team than the 2018 version, but there are just too many tough games to push too much further past the seven-win mark. But the seven-win mark should still get this team back to a bowl game once again.