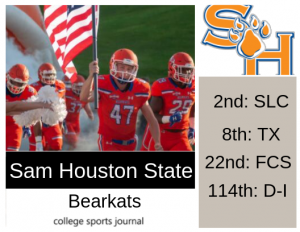 2018 In a Sentence: After many years of success for the Bearkats, 2018 brought a down year. Two time defending Walter Payton Award winner Jeremiah Briscoe graduated after the 2017 season and the Bearkats had to find a way to fill his big shoes. The first shot was given to Michael Dare, but he could not provide the consistency needed. Eventually QB Ty Brock took the helm and played well. Having Brock installed as the QB from the start of camp should give the Bearkats a boost.

Biggest Shoes to Fill: WR Davion Davis was the guy who could be expected to go up and get the ball. Davis was limited to 8 games in 2018 but still hauled in 52 catches and 10 touchdowns. For his Sam Houston career, Davis amassed an amazing 226 catches, 3181 yards and 40(!) touchdowns- a Cris Carter-like 18% of his catches were touchdowns.

Key Player: Luckily for Sam Houston, Davis wasn’t the only excellent receiver at their disposal. WR Nathan Stewart returns in 2019 for his senior season, coming off of a season where he caught 58 balls for 1063 yards. Stewart has already amassed 3715 yards in his first three years in Bearkat orange and blue. If he performs as expected, he could have a shot at 5000 career yards.

Fearless Prediction: Sam Houston should rebound from a tough 2018 to once again challenge for the Southland title and chance at a playoff seed in the FCS playoffs. As has been the case for the last few years, how far the team goes will depend on how much its defense has improved.