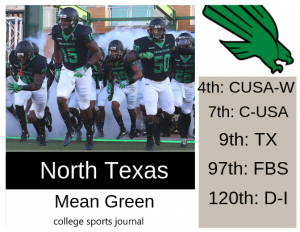 2018 In a Sentence: UNT finished the season 9–4 (5–3 C-USA) play to finish in a three-way tie for second place in the West Division and were invited to the New Mexico Bowl where they lost to Utah State.

Biggest Shoes to Fill: LB E.J. Ejiya leaves Denton second in program history in career tackles for loss (40.5) and is the program leader in single season tackles for loss (25.0 in 2018). He was a first team All-Conference USA selection in 2018 and led the team in tackles with 121 (60 solo) with team highs in tackles for loss – his 25.0 ranked fourth in the nation. He signed a collegiate free agent deal with the NFL’s Baltimore Ravens this past spring.

Key Player: QB Mason Fine is a legitimate Heisman Trophy candidate. The senior is the NCAA active leader in career passing yards with 9,417, and has 64 career touchdown passes and 13 300-yard passing games to his credit. The key for him will be how he can handle the young offensive line in front of him to put up similar numbers as the past two years.

Fearless Prediction: With one of the nation’s most productive quarterbacks leading the way, North Texas should contend for a C-USA title. However, how well this year’s team will do will depend on how coach Seth Littrell develops a young offensive line and weathers the loss of several key defenders. Expect a small dip in the standings but still with Fine at the offensive helm, this team will still go bowling.