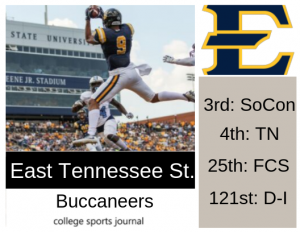 2018 In A Sentence: Since reinstating the football program in 2015, East Tennessee State has been slowly improving, culminating in an 8-4 season and FCS playoff berth under first year head coach Randy Sanders. The Buccaneers picked up big conference wins over Chattanooga and Furman on the way to the playoffs where they lost in the first round to Jacksonville State by a touchdown.

Biggest Shoes to Fill: QB Austin Herink left East Tennessee State as a four year starter in 2018. Herink did not have a great senior year with more interceptions (8) than touchdowns (6), but he was effective enough to get the team to the playoffs. It’s always had for a program to replace a four year quarterback, but it has been reported that East Tennessee State has QB Cade Weldon transferring from Miami (FL) for the 2019 season.

Key Player: RB Quay Holmes was excellent for the Buccaneers in his freshman season, rushing for 928 years and 13 touchdowns. Holmes was not a one trick pony factoring into the pass game and the return game to amass 1480 all-purpose yards, good for second in the Southern Conference. Holmes should run for over 1000 years this year and could threaten the 2000 all-purpose yard mark.

Fearless Prediction: East Tennessee State took a big step forward in 2018 and will be looking to take another step in 2019. Wofford may be the Southern Conference favorite in 2019, but if the Buccaneers can get improved quarterback play, they can threaten Wofford’s claim to the throne.