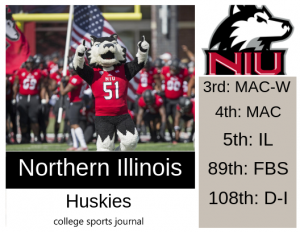 2018 In a Sentence: The Huskies won the MAC West and defeated Buffalo to win the program’s fourth MAC title game in its history but lost the Boca Raton Bowl to C-USA champion UAB to finish 8-6 overall (6-2 MAC) and also lost Coach Rod Carey, who took the head job at Temple following the bowl game.

Biggest Shoes to Fill: DE Sutton Smith was a two-time All-American and left the program after his junior season last year to be drafted in the sixth round of the NFL Draft by the Pittsburgh Steelers. Last year, he had 15 sacks, 11.5 tackles for loss against the run, four forced fumbles, and a pass breakup, a year after he’d led the country with 14 sacks.

Key Player: RB Tre Harbison was the Huskies’ first 1,000-yard rusher since 2015, finished with 1,034 yards on 206 carries. He was named as a second team All-MAC running back after averaging 5.0 yards per rush with just 11 yards lost on 206 attempts, and five TDs. Under new Coach Hammock (a former NIU running back himself), the Husky running game will now become the key to the NIU offense.

Fearless Prediction: NIU should still be a strong team, but with the coaching change and the key loss of Sutton on defense, the defensive side of the ball will not be as strong. The offense should be as good as ever, but asking for another MAC title looks too much to ask for. The Huskies will still be good enough for a bowl, but will just miss out on another MAC title game.