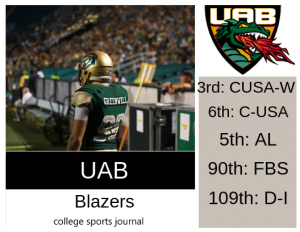 2018 In a Sentence: In just its second season since its revival as program, the Blazers won eleven games (11-3, 7-1 C-USA) and a C-USA Championship over Middle Tennessee State in 2018, as well as the Baca Raton Bowl over Northern Illinois.

Biggest Shoes to Fill: OL Justice Powers, Rishard Cook, James Davis, and Malique Johnson were all selected as either first or second team offensive linemen last year and all are gone this year. This group helped the Blazers eclipse the 30-point mark on five occasions and paved the way for the league’s second best rushing attack. This group will be a big piece to replace this year. Key Player: QB Tyler Johnston III took over at quarterback mid-way through last season, throwing for 1,323 yards and 11 touchdowns. He also rushed for 359 yards and four touchdowns. Behind an offensive line that sees so much turnover, Johnston’s mobility will be vital in avoiding the pass rush that will inevitably get to him.

Fearless Prediction: Despite losing so many players from the team that won the conference a year ago, UAB is still one of the stronger programs in the C-USA. They play in the conference’s stronger West Division, and with road trips to two of the West’s three best teams, another division title seems unlikely. UAB, however, should still be strong enough to finish bowl-eligible.