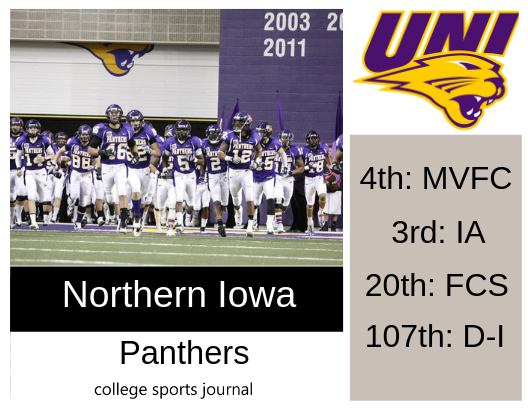 2018 In A Sentence: The Panthers finished tied for third in the MVFC and earned its 10th FCS playoff appearance under Coach Farley, but lost in the second round to UC Davis to finish 7-6 overall (5-3 MVFC).

Biggest Shoes to Fill: QB Eli Dunne was a starter under center for the past two plus years. He threw for 2,584 yards and 18 touchdowns last year. He was signed by the NFL’s Atlanta Falcons but was let go during the preseason.

Key Player: S Xavior Williams makes a move from CB to S this year. The Panthers also switch to a 3-3-5 defensive alignment in an effort to get its best players on the field where UNI is loaded in the secondary (including Korby Sander, Roosevelt Lawrence, Austin Evans, and Christian Jegen). Williams intercepted four passes and broke up eight passes in his freshman season, and followed up last year with another four interceptions last season. Assuming the transition is smooth, Williams will be key to making the defense go.

Fearless Prediction: Outside of the Panther secondary, much of the remainder of the defense must replace a number of key pieces. The offense also must decide on its new quarterback (four-way battle between Jacob Keller, Will McElvain, Nate Martens, and Justin Fomby). Expect some growing pains and as has been typical of Northern Iowa, the Panthers will likely start with a few losses and play must win football down the stretch. This team is talented enough though to get back to the FCS playoffs and expect another bid this year.