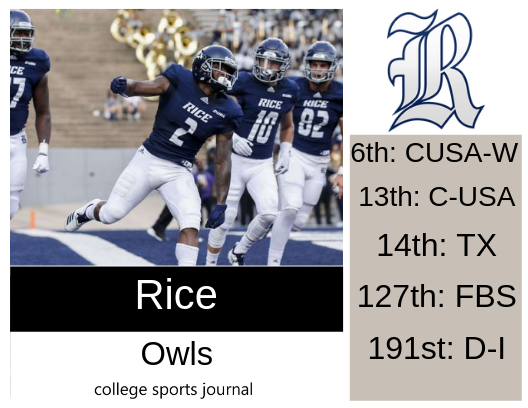 2018 In a Sentence: The Owls won their first (FCS Prairie View A&M) and last (Old Dominion) games of the season but unfortantely did not win any other games in between to finish 2-10 overall (1-7 CUSA) in Coach Bloomgren’s first season with the team.

Biggest Shoes to Fill: P Jack Fox was a Ray Guy Award Semifinalist and led the CUSA with 26 punts of at least 50 yards and 31 punts inside the 20-yard line. Behind Fox, Rice set a school record for net punting (40.11) while placing 18th nationally. He also kept the opposition to a kickoff return average of 16.1, which was sixth in the nation and Rice’s lowest since 1999. He was signed after the NFL Draft by the Kansas City Chiefs to a free agent contract.

Fearless Prediction: Given the team having to begin the season with a challenging schedule that includes nonconference games at Army, and Wake Forest, Texas and Baylor in Houston. If the Owls can get a single victory within those games, Rice could finish above the two-win total from last year but there are too many unknowns for that to be very likley. Look for Rice to finish around the two wins and younger players playing late in the season to be ready for next season.