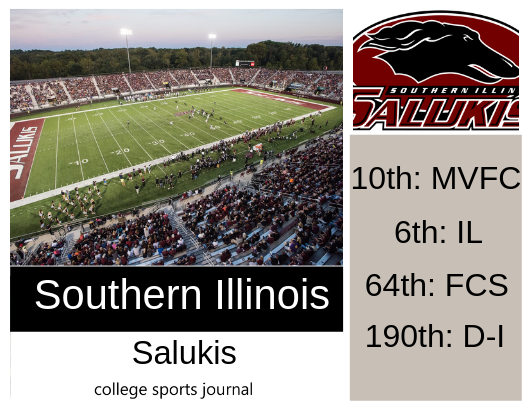 Biggest Shoes to Fill: QBs Sam Straub and Matt DeSomer were both seniors last year. Straub started the season but was injuried in the Salukis Mississippi game and led to DeSomer playing. DeSomer started the last five games (six total) with Straub starting the others. No other quarterback on the Saluki roster has played in game action so SIU will be very inexperienced at what is the most critical postion in Coach Hill’s pass happy offense.

Key Player: RB D.J. Davis ran for 1,118 yards and averaged 6.3 yards per carry last season as he assumed a larger role in the offense. . Davis recorded six 100-yard rushing games, including a career-best 201 yards versus South Dakota State. He was also a threat out of the backfield, catching 29 passes for 201 yards and caught at least two passes in 10 games. With a new quarterback under center, Davis will need to be the focus point for the Saluki offense.

Fearless Prediction: With little experience at the quarterback, the offense will likely struggle at times. The Saluki defense does return 10 starters but will need to improve as the Salukis surrendered more than 40 points per game last season. Also, Coach Hill brought in five new coaches including a new offensive and defensive coordinator. SIU will likely be a better team than especially towards the end of this season but don’t expect much more than a win or two improvement.