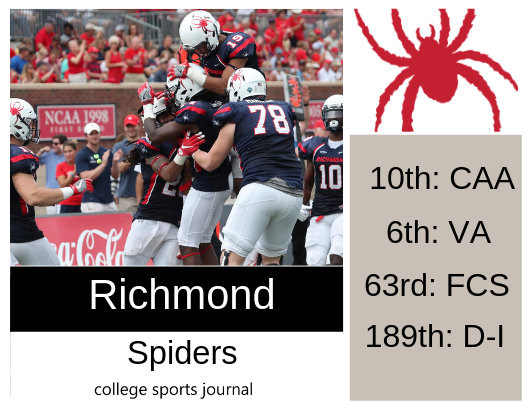 2018 In A Sentence: Richmond came into the 2018 season hoping to make a run at a playoff spot. But a porous defense caused the Spiders to struggle the entire season allowing 27 or more points 8 times. In CAA play, Richmond went 2-6 with their only wins coming against Albany and William & Mary by a combined 7 points.

Biggest Shoes to Fill: WR Cortrelle Simpson had a strong senior season for the Spiders, hauling in 36 passes for 651 yards and five touchdowns. He had a huge game in a loss against Delaware with 8 catches 220 yards and a two touchdowns. As a junior, Simpson was over 1000 yards receiving. He signed as an undrafted free agent with the Tampa Bay Buccaneers following the 2019 NFL draft.

Key Player: Last year the Spiders used 3 different quarterbacks trying to find the right spark for the offense. QB Kevin Johnson is gone, so the first shot this season probably goes to QB Joe Mancuso. In 2018, Mancuso throw 7 touchdowns and 10 interceptions. If he wants to hold the job, he will have to be better than that. Primary competition should come from QB Reid Chenault who saw some action in 2019 as well. Behind those two, there are a couple of freshmen looking for an opportunity in what seems to be a wide-open competition.

Fearless Prediction: With questions at quarterback and a less than average defense, Richmond will take a step back in the CAA this season. A bad season could cost Russ Huesman his job at the end of the year after 2 previous poor seasons.