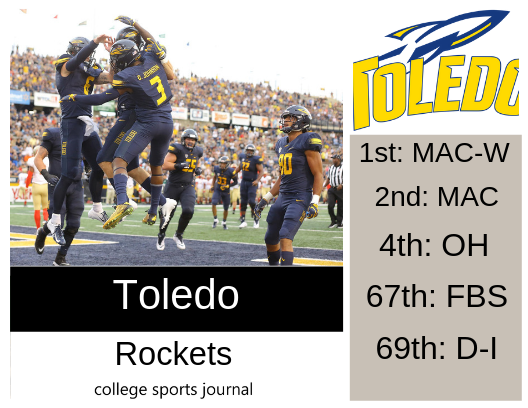 2018 In a Sentence: After winning the MAC in 2017, Toledo had injuries and inconsistent play, especially on the defensive side of the football, led to to the team struggling early in 2018. Toledo lost four of its first seven games, but the team rebounded to win four of its final six contests to become bowl eligible for the ninth consecutive season with a Bahamas Bowl loss to FIU to finish 7-6 overall (5-3 MAC)

Biggest Shoes to Fill: WRs Cody Thompson, Diontae Johnson and Jon’Vea Johnson leave the receivers group trying to make up for the loss of three all-conference selections and nearly 70% of the production from last season. The only two receivers with any measurable contribuitions are WR Desmond Phillips (220 yards) and TE Reggie Gilliam (71 yards) look to become the top targets in 2019.

Key Player: QB Mitchell Guadagni or Eli Peters will be key with whomever starts.Guadagni started seven of the first eight games last season and compiled 1,481 yards of total offense and 16 touchdowns before going down with a season-ending injury. Peters replaced him to lead the team to a 4-2 finish while passing for 1,837 yards and 18 touchdowns. The Rockets will need to decide which quarterback will be the starter to have some consistancy.

Fearless Prediction: A key on the Toledo defense is to improve its performance after allowing near the league worst 432.3 yards and 30.5 points per game. The offense will likely be just as productive despite the losses at the receiver position. But looking at the overall talent, the Rockets are near the top of the MAC and will be enough to with the MAC West Division.