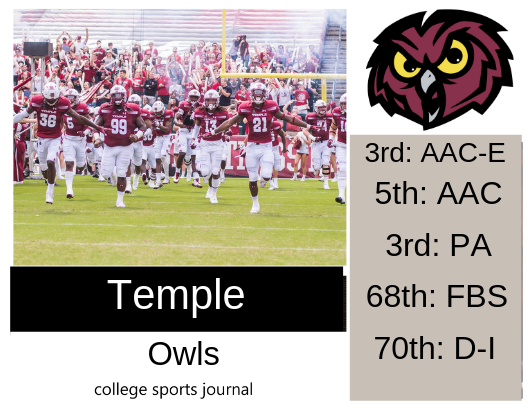 2018 In a Sentence: Temple dropped its first two games but went on to win eight of their final 10 regular-season games, including an upset of a nationally ranked Cincinnati team in overtime. Temple qualified for its fourth consecutive bowl game, but before the team lost to Duke in the Independence Bowl, Coach Geoff Collins left the program to become head coach at Georgia Tech and the Owls finished 8-5 overall (7-1 AAC).

Biggest Shoes to Fill: RB Ryquell Armstead rushed for 1,098 yards rushing on 210 carries (5.2 average) and scored 13 touchdowns and was named first team All-AAC. He was drafted by the NFL’s Jacksonville Jaguars in the fifth round of this past spring’s draft.

Key Player: QB Anthony Russo took over for the now departed Frank Nutile, who went down with an injury two games into the season. Russo finished his sophomore season with 2,563 yards passing with 14 touchdowns while leading the Owls to a 7-3 mark. He will be key in the Owls’ new offense that likely would prefer to run the ball more and his passing game will be heading by a new headline RB, either Jeremy Jennings or Tyliek Raynor.

Fearless Prediction: Temple hired former Northern Illinois Coach Rod Carey as its second choice (Manny Diaz, a Miami (FL) assistant got the call days after he was hired by the Owls to be the head man there at Miami). The Owls feature a wealth of experience, with 13 total starters returning including 10 seniors so weathering a new coach should not be much of a concern. This team will not be ready to challenge the tough AAC East Divsion but still should finish a similar record as last year.