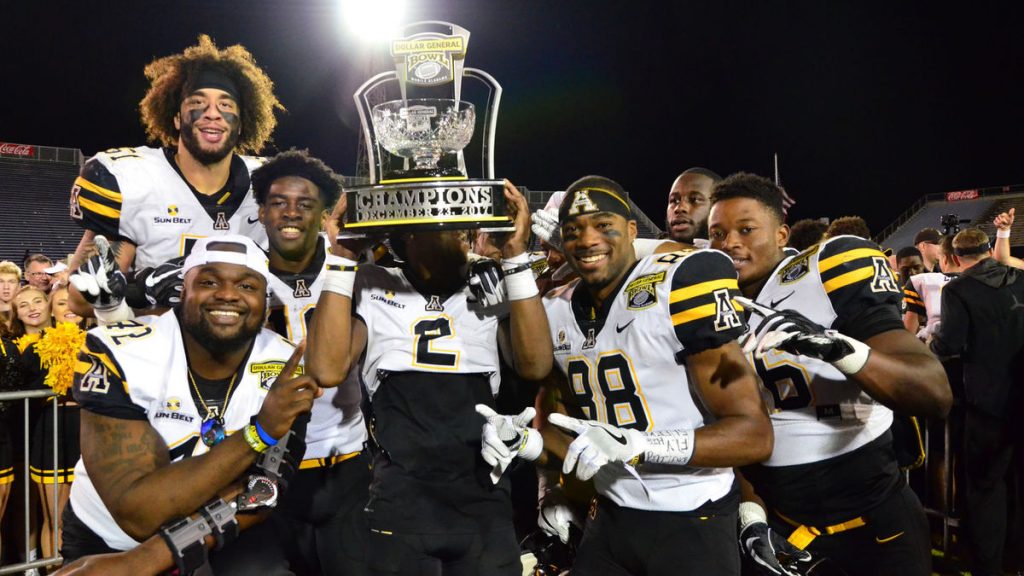 MOBILE, Ala. — Nate Woody was genuinely worried about the health of his defense when he met a group Mountaineer fans Saturday morning at the team’s hotel several hours before the Dollar General Bowl.

Woody quickly rattled off a list of his walking wounded.

But the veteran defensive coordinator and his Mountaineer cohorts had little to be concerned about as ASU turned in its best performance of the season with a 34-0 victory over Toledo in the battle between the champions of the Sun Belt and Mid-American conferences before 28,706 fans at Ladd-Peebles Stadium and an ESPN television audience.

Jalen Moore rushed 22 times for 125 yards and three touchdowns on the way to most valuable player honors and the Mountaineer defense blanked a Rocket attack that came into the contest ranked 11th nationally in scoring at 39.2 points per game.

“I’m extremely proud of our players and our staff for what they’ve been able to accomplish this season,” ASU coach Scott Satterfield. “We won the Sun Belt [Conference] for the second time in a row, and to be able to get to a bowl game like this and play as well as we did tonight was unbelievable. Really, we played our best football the last four games, our chemistry just worked the last month. These guys have put in the work, I’m just glad that they’ve been able to reap the benefits, particularly our seniors.”

Toledo (11-3) was limited to 146 yards of total offense, with 22 yards rushing on 21 attempts, while being shut out for the first time since 2009. It was the first shutout in the 19-year history of the Mobile-based bowl game.

“I think we do a whole better when I worry,” said Woody, now in his fifth year as Appalachian’s defensive coordinator. “The last four games, we’ve played our best football.”

The Mountaineers allowed just 30 points in those final four games (4.5) after being scorched for 233 in the first nine contests (25.9).

It was the first time that App State (9-4) had held an opponent scoreless in postseason play since the Mountaineers beat two-time defending national champion Georgia Southern 19-0 in the quarterfinals of the I-AA playoffs on the coldest day in Kidd Brewer Stadium history.

ASU’s only other postseason shutout came in a 7-0 victory over Moravian in an unnamed, lower-division bowl game in 1938.

It marked the second year in a row that the Mountaineers had beaten the Rockets in a bowl game. Appalachian edged Toledo 31-29 in last season’s Camellia Bowl.

ASU also won a bowl game for the third consecutive year of eligibility, extending the NCAA record it established last season. The Mountaineers beat Ohio University 31-29 in the 2015 Camellia Bowl.

Appalachian controlled both sides of the line, inflicted almost constant pressure on quarterback Logan Woodside — the career-passing leader in the MAC — and won the turnover battle 4-0. Woodside was limited to 124 yards on 16-of-29 passing with a single-game, career-high three interceptions.

“They disrupted our rhythm a little bit and threw our balance off,” Toledo coach Jason Candle said, “and once the score got one-sided, we got one-sided in our play calling too and that’s really not who we are.”

Toledo’s defense hung tough until Woodside was picked off by inside linebacker Anthony Flory with under six minutes left in the first quarter. Flory scurried 19 yards to the Rocket 36 and the Mountaineers took advantage of the mistake.

“I think it just gave us that momentum that we needed,” said Flory, who was the defensive MVP. “Our coaches always preach about momentum, keep the momentum. That was just a real good way to get momentum on our side. I was real happy about that. That was my first pick, it was a good feeling.”

Moore pounded the Toledo for runs of 15, 10 and seven yards, with his final carry giving App State a 7-0 lead.

From there, Appalachian kept applying the pressure and the Rockets continued to make costly miscues.

After Toledo went three and out on its net drive, the Mountaineers took charge with an eight-play, 64-yard drive, highlighted by Daetrich Harrington’s 16-yard jaunt and Ike Lewis making a route adjustment for his diving, 23-yard catch at the Toledo 13.

Moore finished things off with his second seven-yard TD burst and Appalachian was ahead 14-0 three plays into the second period.

Harrington played a key role on the next ASU possession as well, with his 35-yard scamper leading to Chandler Staton’s 29-yard field goal. Harrington finished the game with nine rushes for 72 yards as ASU piled up 327 yards on the ground.

On the ensuing kickoff, Kaiden Smith stripped Toledo returner Diontae Johnson of the ball and Austin Exford recovered the fumble at the Rocket 14 to set up Staton again for his 23-yard field goal.

Down 20-0, Woodside tried desperately to rally his team, moving the Rockets to the Appalachian 35. Following two incomplete passes, Woodside was apparently scrambling out of trouble when defensive end Caleb Fuller made one of the most important tackles of the night.

Fuller, a senior defensive lineman, playing his final game, lunged to tackle Woodside by the ankle for a sack that killed Toledo’s best first-half drive and forced another Rocket punt.

Instead of cutting App’s lead to 20-7 before the half, with the Rockets set to receive the kickoff at the start of the third period, Toledo’s hopes were dashed.

The last gasp for Toledo came on that initial third-quarter march, but was snuffed out when free safety Desmond Franklin intercepted Woodside and returned the ball 35 yards from the Mountaineer four to the 39.

“It was pretty tough, I felt like I let my team down,” said Woodside, who is considered an NFL prospect.

With good field position again, Lamb converted a fourth and with his two-yard keeper and hit Lewis for 16 more yards. Moore then rumbled 31 yards for his third score of the game and it was 27-0 after three stanzas.

The Mountaineers tacked on one final touchdown in the fourth quarter when Malik Williams turned a reverse into a three-yard scoring play.

“It obviously starts with our defense,” said Satterfield. “The way our defense played tonight they really didn’t mount any drives on us. When we were able to get the ball offensively we wanted to pound the ball and we were able to do that early this game, we had over 200 yards at halftime and that set the tone for the game. When we play like that and get a little bit of a lead that’s when we’re really dangerous, they start trying to force the ball down the field and that’s where we get some of these turnovers.”