The Big Sky continued to reveal its true self as close games proved who was the better team and blowouts solidified resumes. Montana State continues to dig themselves into a hole as they look like a talented, but overrated 5-3 team with just 50 percent wins in conference games. Montana, Weber, and Sacramento all took steps forward in the chase for the crown.

With Dalton Sneed out, EWU saw a chance to sneak a win out of Missoula. Halftime made Montana fans worried as the Griz trailed 14-10. EWU would extend the lead by a field goal and plateau from there. Cam Humphrey may not be Sneed, but a combined effort of Humphrey’s arm and Marcus Knight’s running finished off the Eagles. Coach Bobby Hauck has a knack for revitalized performances after halftime. With the adjustments made Marcus Knight finished the game with 131 rushing yards, 65 receiving yards, and 3 rushing touchdowns. 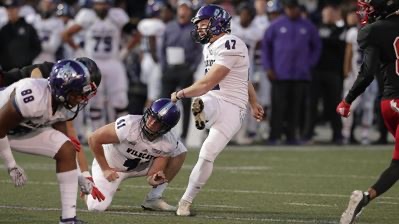 Weber State is not known for being an offensive power, but the offense combined with Trey Tuttle’s powerful leg kept them scoring enough. That combo plus the fierce Wildcat defense make up what is now the third best team in the FCS STATS poll. UC Davis has offensive weapons, but has been broken down this year without a defense to save them. A once favorite for playoff contention now hosts a losing record, despite having star quarterback Jake Maier.

Speaking of favorites who have fallen, Montana State continues to fall down on expectations. A hot contest with North Dakota reached its breaking point when the Fightin’ Hawks blocked the Bobcats punt in the end zone. The back and forth game ended with a final score below 30 which is hard to come by in the Big Sky. North Dakota is leaving a true stamp on several Big Sky teams in their departure to the Missouri Valley Conference.

Matt Struck tried to be the magic man, but the Thunderbirds’ nest was too much to handle. A usually composed quarterback was taken down with three interceptions and a 25-point loss. Chris Helbig led the SUU offense on a hot start with four first quarter touchdowns. Southern Utah used its home field advantage to the fullest as offensively and defensively they came alive. An unusual sight in Cedar City as the Thunderbirds flew to a win over the Bengals.

Northern Arizona is lucky to have Luis Aguilar as he continues to win games for the Lumberjacks. Case Cookus seemed to be in control of the game as NAU jumped out to a lead of three scores. Slowly all that progress would be chipped away by the Viking offense. Portland State pulled within two points off a rushing touchdown from Malik Walker, but would fail the two-point conversion. Portland State needed another scoring drive so they got in position for a field goal and went up by one. Fortunate for NAU, Luis Aguilar is one of the better kickers in the entire FCS and had no problem draining a 38 yard field goal for the win. Both quarterbacks put up 300+ yards passing and Portland State’s Sergio Hoffman and Charlie Taumoepeau also excelled offensively. Hoffman rushed for 140 yards and a touchdown on 23 carries, and Taumoepeau had five catches for 127 receiving yards as a tight end.