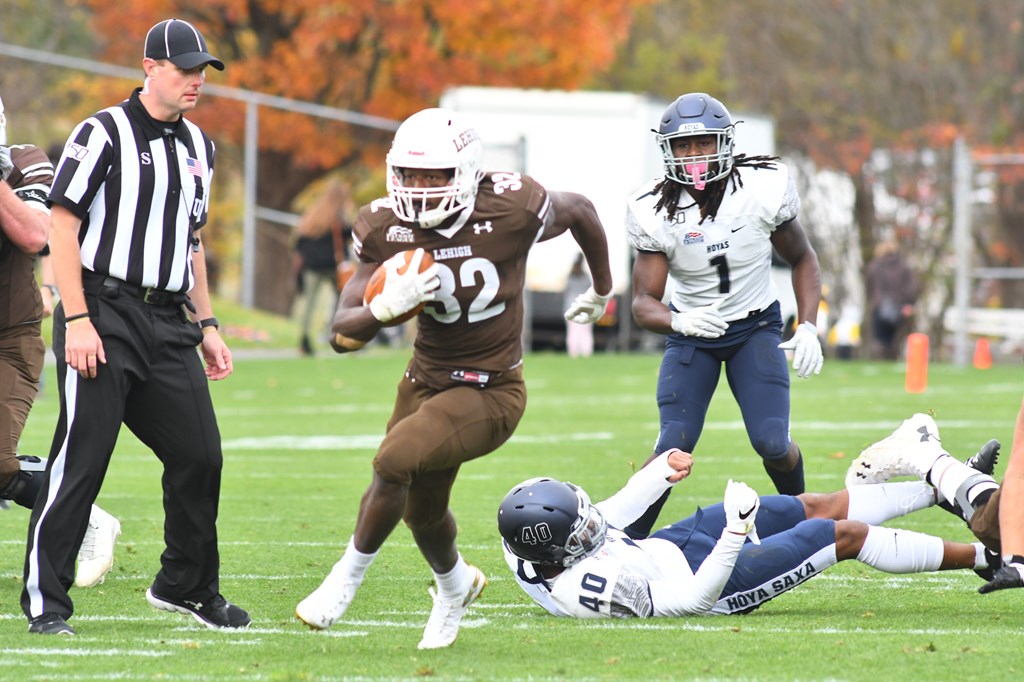 Before the season started, Lehigh was picked to finish fifth in the Patriot League.

Perhaps it wasn’t a surprise that the Mountain Hawks were picked there, coming off a deeply disappointing 3-8 season, hiring a new head coach, and fielding a team that in early August was nearly half underclassmen and players without a lot of game experience.

After their 27-24 win over Georgetown – their third conference game won on very memorable final plays – what is the Mountain Hawks’ secret for pulling out these conference wins?

For head coach Tom Gilmore, he sees the fighting character of this Lehigh team as potentially their biggest ally for the 4-3 (3-0) Mountain Hawks in their rise to the top spot in the Patriot League.

“They keep fighting to the end,” Gilmore said. “It’s something I think every coach preaches, but I’m not so sure it happens as much as it’s been happening for us, four weeks in a row. But even before the last four weeks, we kept saying that same thing the first three weeks of the season [when Lehigh went 0-3].

“Then, I’m not so sure many people believed what we were saying. But we saw the improvement. We still have a lot of improvements to make – I think every player, every coach can tell you that. But the kids keep working hard every week. And they keep coming to work. They keep fighting. It was an amazing finish.” The transformation of this Lehigh team has been fairly remarkable.

At the start of the season, the Mountain Hawks were a very young team with more than 40% of their roster as underclassmen. The starting quarterback, QB Tyler Monaco, hadn’t played much significant time, and the defense seemed to need a complete retooling after sitting on the bottom of FCS defensive categories for years.

And getting off to an 0-3 start might not, to the casual observer, have seemed like the start to a Patriot League winning season.

Yet there was some real progress made during those first three defeats, one coming when PK Austin Henning missed a potential game-winning field goal against St. Francis (PA), and two others against then-nationally ranked FCS opponents in Villanova and UC Davis.

Even in the losses you could see hints, late in the games, of good things, like the two touchdowns at the end of the UC Davis game to avoid the shutout, or a big sack by LB Keith Woetzel when the outcome of the game wasn’t in doubt. Finally, in a win against Merrimack 10-3 – the first of four straight games won in the final two minutes – this Lehigh team would finally reap some of the hard work they had put in.

After giving up 41 points to a top 5 team, the Mountain Hawks held the Warriors to -25 yards rushing, sacked Merrimack quarterbacks six times, and held the Warriors to only a single field goal. On a 4th and 8 from the Lehigh 20, under immense pressure, the pass from QB Cam Hayes fell incomplete with 46 seconds left to play, giving the Mountain Hawks their first win by a 10-3 score.

Little did Lehigh fans know that they’d have the game on the line late against their next three opponents, all Patriot League opponents, as well.

Against the defending champions Colgate up in Hamilton, New York, QB Grant Breneman completed a 5 yard pass on the final play of the game to WR Garrett Oakey, about three yards short of the goal line. Oakey turned, and reached for the end zone, where Lehigh CB Divine Buckrham tackled him from behind down around the 1 yard line. That tackle gave Lehigh a 21-14 win over the Raiders.

The following week saw Lehigh need overtime to beat Fordham. After the Rams went ahead with a field goal from PK Andrew Mevis, Lehigh would get the ball in overtime, but QB Tyler Monaco got hurt during the drive. Backup QB Addison Shoup then came in and found WR Dev Bibbens to give the Mountain Hawks a 30-27 win over Fordham, who had beaten Lehigh in five out of their last six meetings.

Then there was this past weekend’s game against Georgetown, which followed a similar pattern.

Lehigh seemed to be able to do no wrong in the first quarter, jumping to a 10-0 lead, but then the Hoyas “turned the momentum around,” as Gilmore put it, scoring 16 straight points to get a slender 16-10 lead late in the third quarter.

Needing to make something happen, the Mountain Hawks’ offensive line, which had been struggling, seemed to transform on three grinding drives that ended up being the difference in the game.

The offense that had struggled had finally started to get yardage in chunks, with Monaco finding WR Dev Bibbens for one first down, and WR Jorge Portorreal for a 39 yard strike to set up the Mountain Hawks with first and goal. RB Nate Hope would fumble an option pitch for a loss of yards, but would bounce back a couple of plays later on 4th and goal at the 1, powering through the offensive line to get the game-tying touchdown.

Lehigh would then get the ball back and the offensive line kept their momentum rolling, helping grind out a 15 play, 73 yard drive that would chew up more than nine minutes off the clock and would end with Hope’s second touchdown on the afternoon. Three times Lehigh would have 3rd-and-less-than-three on the drive, and three times Hope or RB Zaythan Hill would get pushed ahead for the first down.

Up by 8, Lehigh fans might have thought the game was over, but Georgetown QB Gunther Johnson had different ideas. On 4th down, Johnson connected with WR Michael Dereus for a 70 yard touchdown strike, and then converted the 2-point conversion to tie the game at 24 with about a minute and a half to play.

A 48 yard connection from Monaco to Bibbens put Lehigh within range of Austin Henning for a game-winning kick.

“Scott Brisson, our offensive coordinator, talked me into that one,” Gilmore said. “That’s a real tough situation because you don’t want to give Georgetown the ball back. Do you run it and try to force them to use a timeout and run some time off the clock? What do you do? We decided to go ahead and throw it.”

With two seconds left, Henning coolly converted the kick – “just like any other kick,” he pointedly said – and Lehigh had won their fourth straight game in the final minutes.

“It was amazing, ” Nate Hope said after the game. “We know that we have four or five backs that can go out all time, and the O line has been playing amazing these past few weeks and we’ve just been having great weeks of practice, and it showed up today. We know we have a lot of playmakers, on the outside, in the backfield, quarterback. Everybody’s a playmaker. And we just had to find a way to come together as a team. And that’s what we’ve been doing.”