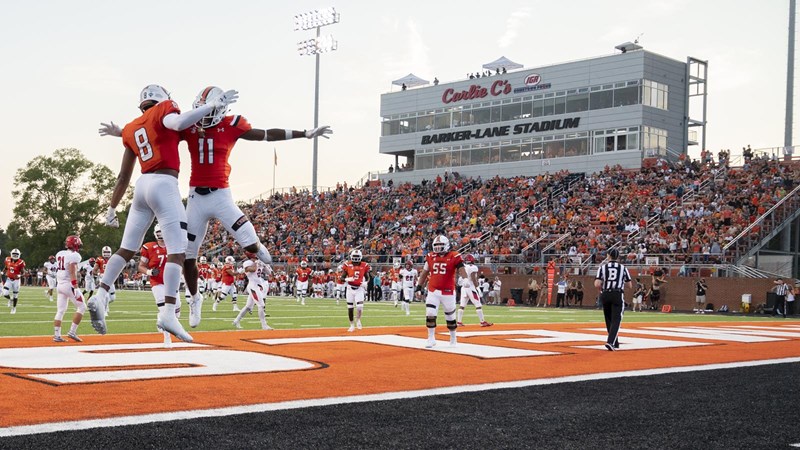 It’s been a season of highs and lows for Hampton as the Pirates look to be a factor in the Big South race. They will need Saturday to be one of those highs if they are to have any hope of challenging for the conference crown as the Pirates travel to take on Campbell in the Camels’ homecoming.

Hampton opened the season with a win over Elizabeth City State and followed that up with a loss. The rest of the season to this point has been a replay: a win, a loss, a win, a loss … you get the picture. Another setback would drop the Pirates to 0-2 in league play and virtually eliminate them from title contention.

Hampton enters the game with an average of 441.4 yards of offense per game, more than 60 yards better than Campbell’s 376.2 yards per game. The Pirates have a decided advantage on the other side of the ball as HU is giving up 352 yards per game, while the Camels are allowing 425.8 yards per contest.

Campbell, meanwhile, won its conference opener and will be looking to keep it unbeaten league record intact and keep pace with Kennesaw State.

Key Players: Hampton QB Deondre Francois has completed 81 of 131 passes for 1,131 yards and 13 touchdowns to spearhead the Pirate offense, which relies heavily on the passing attack (246.6 ypg). His favorite receiver so far this season has been WR Jadakis Bonds, who has caught 26 passes for 444 yards and nine scores. The rushing attack, which is averaging just 194.8 yards per game, is paced by RB Shai McKenzie, who has rushed 70 times for 369 yards and a pair of scores. Francois leads the team, along with Will Robinson, with three touchdowns on the ground for Hampton. Robinson has rushed 37 times for 237 yards.

Campbell also prefers to go to the air behind freshman QB Hajj-Malik Williams, who has completed 62 of 99 passes for 985 yards and 10 touchdowns in his rookie season. The Camels average 205.8 yards per game through the air.

Williams’ favorite targets have been WR Davarius Bargnare (a sophomore) and redshirt sophomore WR Caleb Snead, who have combined for 31 catches and 533 yards. Snead has caught 15 passes for 273 yards and four touchdowns, while Bargnare has added 260 yards on 16 receptions and a pair of scores for the Camels.

Monmouth looks to keep pace with league leader Kennesaw State when the Hawks entertain Gardner-Webb in Homecoming on Saturday at Kessler Stadium. The Bulldogs will be looking to also keep KSU in sight.

Both teams enter the game undefeated in conference action after one game and Saturday’s winner will gain plenty of momentum heading into the final weeks of the regular season.

The end is nearing for Presbyterian as a member of the Big South Conference and the Blue Hose are probably looking forward to not having Kennesaw State on its schedule for the foreseeable future. PC will become a member of the non-scholarship Pioneer League next season.

The Owls, who are averaging 39.2 points per game this season, should have little trouble in dispatching Presbyterian, which has allowed 30 touchdowns in six games on the year. KSU is ranked No. 4 in the latest FCS Coaches Poll.

North Alabama is looking to make a name for itself in the Big South Conference and a win on Saturday over Charleston Southern could go a long way to making that a reality and set the stage for even greater success in the future.

The Lions, who are transitioning from Division II to the Big South and not eligible for the BSC championship until 2022, have had a mixed bag of results in their new league in 2019. They defeated Presbyterian earlier this season and are coming off a narrow 40-34 loss at Hampton two weeks ago.

Charleston Southern has struggled to get untracked this season. The Buccaneers dropped their first four games before slipping past Savannah State 24-19 two weeks ago for their first triumph of the year. CSU dropped their conference opener to Kennesaw State last weekend.

This could come down to whoever has the ball last as both teams are searching for an identity on defense. UNA is giving up 33.3 points per game, while the Bucs’ opponents are scoring 38.5 points per game. The edge might have to go to the Lions, who are scoring at a 25.7 points per game clip compared to 17.3 for the Buccaneers.