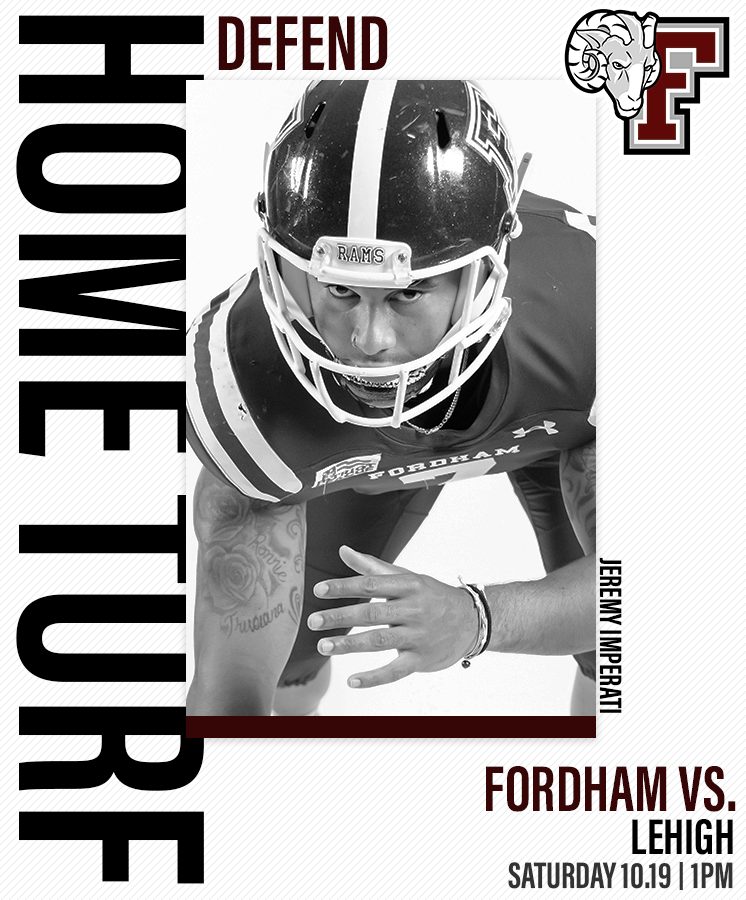 There were plenty of lowlights last season for a Lehigh football team that went 3-8.

But one of the more memorable lowlights was a home game vs. Fordham against two teams that were struggling mightily.

“In retrospect, the game was lost at the opening coin flip,” I wrote then. “Two sets of captains made their way to midfield. Lehigh won the toss, and deferred. The Fordham captains came back from the coin toss, and chest-bumped the rest of the team – even though, technically, they lost the toss. In contrast, Lehigh’s captains slowly walked back to the sidelines, slowly, and seemingly without much emotion.”

After watching a listless, emotionless coin flip, it was then not too much of a surprise when Fordham, who was at the time winless, eventually would jump out to an 8-0 lead and would never look back, pummeling Lehigh 43-14 to deal the Mountain Hawks their fifth consecutive loss.

Two weeks ago, Lehigh held off defending champions Colgate 21-14 on a last-second defensive stand, and have had an extra bye week to soak in the juices of that thrilling win.

And last week, Fordham stunned Georgetown in the final minute to escape DC with a 30-27 win.

Both teams find themselves sitting tied atop the Patriot League standings, playing for first place, and unlike last year, there will be no shortage of passion on the field at Jack Coffey Field at 1:00 PM this Saturday.

In all three of Fordham’s wins this season, the Rams started out slow, fell behind, and rallied to take the lead.

And in all three contests, the rallies came from QB Tim Demorat settling down and directing the Rams offense in clutch drives that would put the Fordham defense in the right spot cement the win. He’s an efficient passer who has spread the ball around effectively and also has been known to take off with the football, scoring a couple touchdowns on the ground.

Going into the season, there were questions about who might emerge as playmakers around Demorat, as most of the skill players around him had graduated. A pair of skilled transfers, and the re-emergence of a player recovering from injury, has provided those answers.

He along with Rutgers transfer RB Trey Sneed form a potent 1-2 punch that has been the engine that has propelled the offense.

Another transfer, WR Fotis Kokosioulis who came to Fordham from Northern Illinois, has provided the much-needed go-to receiver for the Rams, too. The Park ridge, Illinois native has 429 yards receiving and 6 TDs, including the dramatic game-winner last week vs. Georgetown.

“He’s really fast, he really can scoot,” Gilmore said. “He’s quick, has really good moves, and understands their offense real well. He’s their primary target, especially when they want to go deep. He can make a lot of big plays when he gets free.”

For Lehigh, who has been known over the years for having a potent fast-paced offense, the Mountain Hawks’ last two wins have come from an unlikely place – the defense.

Led by LB Keith Woetzel and DE Erik Slater, Lehigh’s run defense has gone from one of the worst in all of FCS last season to the 4th-toughest in all of FCS. Slater, who leads the Mountain Hawks in tackles for loss, already has 9 on the season, while Woetzel, who leads the team in solo tackles with 39, isn’t that far behind.

As a unit, they have only yielded on average 74 yards per game and opposing ballcarriers are only averaging 2.43 yards per rush against them.

In the last two weeks, the Lehigh defensive front has combined for 13 sacks and held both Merrimack and Colgate to a combined -14 yards rushing.

“I think our coaching staff did a great job all week of putting in packages where we could get some pressure on the quarterback,” Slater said after the Merrimack game, a 10-3 win that was Gilmore’s first as Lehigh head football coach. “It wasn’t just me, it was the whole D line getting there, and a lot of guys had opportunities and a lot of guys had sacks.”

Gilmore, a former defensive coordinator for the Mountain Hawks, seems to have infused his passion and work ethic to the Lehigh defense, with eye-opening results.

“They’re playing really good defense right now,” Fordham head coach Joe Conlin said this week. “They’re running to the ball well, and been getting to the quarterback, so that’s going to be a challenge.”

Lost sometimes with the solid play up front is the play of the secondary, where S Divine Buckrham, who got the game-winning tackle against Colgate, and CB Jaylen Floyd, who leads the team in pass break-ups with four. Similar to Buckham, Floyd made a tackle against Merrimack that kept the Warriors out of the end zone and forced them to settle for a field goal, which was critical in that 10-3 win.

How the Fordham offense and Lehigh defense fare when they face off on Saturday should be an excellent battle.