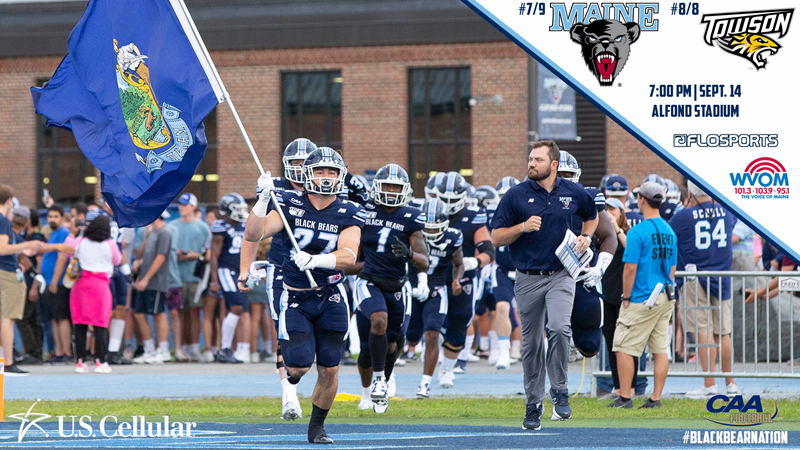 Week two brought a mixed bag of results. The highlight of the weekend was the triple OT thriller in Meade Stadium that saw Delaware outlast the host Rhode Island Rams. That game set the stage for what should be an excellent season of conference matchups. The low point was New Hampshire losing to Holy Cross on a botched snap that the Crusaders fell on in the end zone. Week three presents a couple more CAA conference matchups, including one of the most important games of the year for conference supremacy.

Towson has title aspirations, and is off to a strong start. The Tigers picked up a big win on opening weekend against The Citadel, then taking care of business and cruising past NC Central in week two. They have the look of a top 10 team, but CAA play looms. Towson has a tough next three weeks with visits to Maine and FBS Florida sandwiched around a home game against a dangerous Villanova squad. The Tigers have an underrated defense to go along with its explosive offense. This team has all of the pieces in place to make a strong run in the FCS this year.

Key Player: QB Tom Flacco continues to lead an excellent Tiger offense averaging 35 points a game through the first two weeks. Flacco is yet to throw an interception. The Tigers have yet to need Flacco to put the team on his shoulders and win a game, but that may change this week. He showed against The Citadel that he can lead the game winning drive. But against a defense like Maine, Flacco is going to have to be efficient and dominant.

Maine nearly pulled off the upset over Georgia Southern, but Coach Nick Charlton noted that the Black Bears made too many mistakes that cost them the shot at victory in the end. Maine should be proud of their effort and will have another shot at an FBS win in a few weeks when they take on Liberty. But the Black Bears aren’t worried about what happens in a few weeks. They have a big game in front of them this weekend and they know it. The Black Bears have a big hole on their defense with the news that Deshawn Stevens was lost for the year with a ruptured Achilles. Maine won the CAA a year ago and they fully intend to prove that wasn’t a fluke and back it up with another great year.

Key Player: QB Chris Ferguson has been nothing short of spectacular through two games. He jumped off the chart against Sacred Heart with 423 yards passing and three touchdowns. Against Georgia Southern, he threw for 286 and another touchdown, though he did add an interception. Ferguson will need to match the production of Tom Flacco in this week’s game.

Fearless Prediction: This promises to be an exciting game. We, as fans, can only hope it is as exciting as the Delaware/Rhode Island game. In the end, the loss of Deshawn Stevens is bigger than Maine wants you to think. Take the better quarterback in this one, by just a little. Towson 38, Maine 35

Delaware didn’t look great against North Dakota State for most of the game in Fargo last year and are hoping for a different result this year. While the Blue Hens will play better, the final result will be the same. North Dakota State 35, Delaware 17

This should be an interesting game. Albany looked solid against Bryant, but Monmouth is a step above that and is looking like one of the better teams in the Big South. The Great Danes have improved but will fall just short. Monmouth 24, Albany 20

James Madison and its dominant defense should easily cruse in this game. The backups may play most of the second half. James Madison 55, Morgan State 0

Villanova has had no problem against Patriot League opponents and that continues this week. Villanova 31, Bucknell 7

This is the CAA opener for two teams heading in the opposite direction. Richmond used to be a CAA power and has fallen off the last few years while Elon used to be a CAA doormat who has been excellent the last two years. Davis Cheek easily leads Elon to victory this week. Elon 30, Richmond 13

Wagner nearly beat FBS UCONN and then lost to a DII team. Stony Brook has lost a lot on offense but still brings a stingy defense to the field. Look for the Seawolves to cruise in this one. Stony Brook 27, Wagner 10

FIU is a bad FBS team which would have lost to New Hampshire teams of the past. We don’t know what to make of this Wildcats offense, so go with the FBS team here. Florida International 20, New Hampshire 10