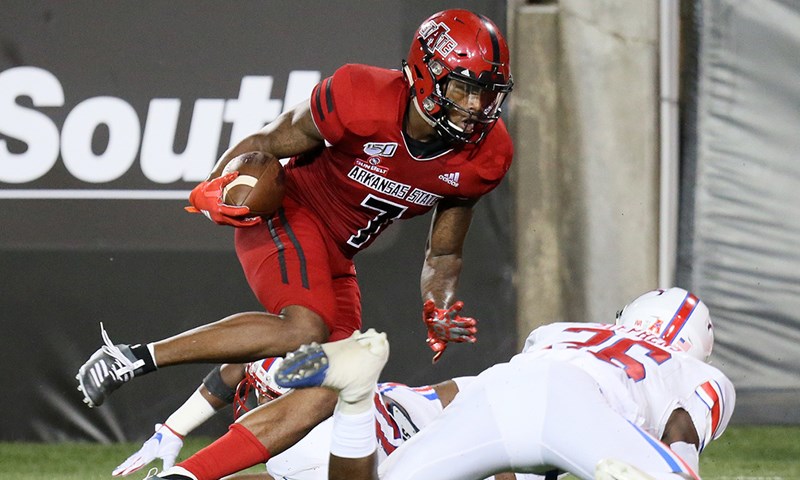 Omar Bayless, WR, Arkansas State, R-Sr., Laurel, Miss.
Bayless became the fourth player in Arkansas State history to record over 200 receiving yards in a game by posting 10 receptions for a career-high 213 yards and a touchdown during the Red Wolves’ 50-43 road victory over Troy. He finished with the third most receiving yards in school history and the seventh most in the nation this season, while also tying the fifth-most ever by a Sun Belt Conference player. Bayless came up with a 92-yard touchdown catch, which was the second longest reception in school history, third longest in the nation this season and tied the fourth longest ever by a Sun Belt player. His 10 receptions tied his career high, and he is now ranked ninth in the nation in receptions with 7.2 per game.

Jack Abraham, QB, Southern Miss, Jr., Oxford, Miss.
Abraham completed 19-of-28 passes for a season-high 351 yards and three touchdowns with no interceptions in a 31-13 win over UTEP. His scoring strikes included a 74-yarder to De’Michael Harris, as well as 22-and six-yard TD tosses, as he orchestrated a Southern Miss offense that collected 519 total offensive yards. It was the second 300-plus yard passing game for Abraham this season and the fifth time in his 14 career games as a Golden Eagle. Saturday was also the third time that he has thrown at least three touchdown passes in a game in his career and has tossed at least one TD pass in each of the last seven contests.

Shakif Seymour, RB, Toledo, Jr., Cleveland, Ohio
Seymour rushed for a season-high 96 yards on 19 carries in the 28-21 win over BYU. Seymour scored the game-winner on a two-yard run with 51 seconds to play. He also caught an 18-yard touchdown pass to tie the score in the third quarter.

Benny Walls, S, Temple, Sr., Cinnaminson, N.J.
Walls tallied six tackles, a fumble recovery, and an interception in the 24-2 win over the Yellow Jackets. Walls scooped up a strip-sack by DT Ifeanyi Maijeh and returned it 74-yards for a touchdown to lengthen the Owls’ lead. Walls also contributed to the stifling red zone defense Temple has had all season. He grabbed an interception in the end zone and returned it 65-yards to set up the Owls with prime field position in order to score again.

Savon Scarver, Utah State, KR, Las Vegas, Nev.
Scarver returned a first-quarter kickoff 100 yards to tie the game at 7-7 in a game the Aggies defeated Colorado State 34-24. The 100-yard kickoff return is tied as the longest in Mountain West history. He is one of six FBS players to return a kickoff 100 yards for a score this season, including the only one to do it in Week 5.