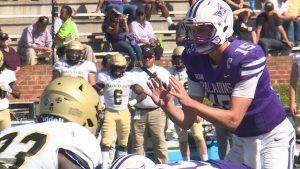 Roberts accounted for all five touchdowns in the Paladins’ 34-14 win over defending SoCon champion Wofford on Saturday. The redshirt senior threw for 235 yards and three TDs in an efficient 16-for-19 performance and ran in two more scores on 32 yards on the ground. Roberts had passing TDs of 24, 10 and 9 yards and rushing TDs of 9 and 1 yards. The Furman win snapped a four-game losing streak in the series and marked the highest-ranked team the Paladins had beaten since taking down No. 3 Appalachian State in 2011.

Doss caught 13 balls for 131 yards and his school-record 15th career 100-yard receiving performance to help UC Davis improve to 5-1 overall and stand as the lone undefeated Big Sky Conference team in first place at 3-0. With 1:09 to play, QB Jake Maier found Doss in the end zone for a 5 yard strike which would make the Aggies tie the game at 37. His final reception in overtime would set up WR Ulonzo Gilliam’s 4 yard run to give the Aggies a lead they wouldn’t relinquish.

In his first-ever start, Skelton, the No. 3 quarterback on the Jaguar depth chart entering the season, led Southern on scoring drives in each of its first three possessions en route to a dominating 38-0 win over Prairie View A&M. The Pine Bluff, Arkansas native ran for 202 yards and 3 TDs, adding 168 yards and a passing touchdown as well in a smothering effort.

Livings made a return to action against Abilene Christian after missing the previous two games due to injury. He played in just 25 snaps on Saturday and recorded six tackles, five of those being quarterback sacks. That total matched a single-game school record, tying Bryan Smith’s record, as well as tying a Southland Conference mark. The total increased Livings’ career mark to 17.5 and moving him into the No. 7 spot on the school’s all-time sack list.

Amos returned three punts for a CAA-record 183 yards and two touchdowns against the Villanova in a 37-0 victory. He found the end zone twice in a 2:10 span of the third quarter, tying a school record with an 89-yard return followed by an 81-yard return. Amos has three punt returns for TD’s this season and leads the nation in punt return average (30.1 avg).