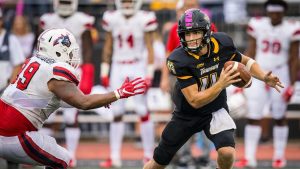 Three of last week’s top 10 teams lost last week, including number two Eastern Washington. The last few weeks in the FCS have been wild with a large number of upsets each week. Weber State’s win over Eastern Washington put them in the conversation for a playoff seed.

In the CAA, Elon was unable to build on its win over James Madison, losing to Delaware and losing a couple of key players along the way.

UC Davis showed it had the most explosive offense in the FCS in their comeback win over Idaho State.

Wofford suffered the biggest lost his week, falling to rival Furman in Southern Conference play. It will be a tough climb back to a seed for the Terriers.

North Dakota State played outdoors for the first time this season. The results were the same: a dominant Bison victory over a good Western Illinois team. The Bison continue to cement themselves as the unquestioned top team in the nation. It doesn’t get easier this week though, as Illinois State comes to the Fargodome hoping to pull the upset.

South Dakota State easily beat Youngstown State despite not having their A game on offense. The Jackrabbits defense is not getting a lot of publicity. But that unit, led by Christian Rozeboom is quietly having a great season. Of concern is an injury to star running back Isaac Wallace. He injured his knee in the game and did not return. The Jackrabbits have a tough road trip to Northern Iowa this week in another meaningful Missouri Valley contest.

Kennesaw State continues to run over its opponents week after week. The Owls ran for 490 yards and got another 7 touchdowns on the ground, including 3 from Chandler Burks in an easy blowout win over Gardner-Webb. The Owls schedule toughens up the rest of the way with 4 games against solid teams who will give them a challenge, culminating in their huge matchup against Jacksonville State in Atlanta on the last day of the season

James Madison took out their frustration after their loss on Villanova, easily beating the Wildcats 37-0. The Dukes posted their third shutout of the season and were aided on the scoreboard by two DeAngelo Amos punt returns for touchdown in the third quarter to put the game out of reach for the Dukes. James Madison has this week off before finishing its season with four tough CAA opponents

UC Davis fell behind by 15 points early in the fourth quarter against Idaho State, but it did not matter. The Aggies stormed back to tie the game, eventually winning in overtime on a Ulonzo Gilliam 4 yard touchdown. Jake Maier threw for 382 yards and 5 touchdowns and All American receiver Keelan Doss hauled in 13 passes for 131 yards and a touchdown in the comeback win. This week, the Aggies travel to Cal Poly to take on the Mustangs in a game they should win handily.

Jacksonville State again went with the two quarterback system in their win against Eastern Illinois. Both Zerrick Cooper and Zion Webb played well when called upon. The two combined for four passing touchdowns and two rushing touchdowns. If John Grass can continue to use both effectively, the Gamecocks will continue to do what they have been doing for years, win OVC games

Weber State used a strong defense and opportunistic special teams to beat Eastern Washington last week. The Wildcats held the Eagles to just a pair of field goals and 247 total yards. Weber’s offense never really got going, but with a defense that strong and a punt returned for a touchdown, it did not matter. The Wildcats will look to avoid a letdown this week when Montana State comes to town.

Last Week: lost to Weber State 14-6
This week: OFF

Eastern Washington struggled on offense without Gage Gubrud at Weber State. The Eagles were held to just 247 yards of total offense and six points. The Wildcats defense suffocated the Eagles drive after drive, never allowing them to get into rhythm. Eastern Washington has a bye this week, and it couldn’t come at a better time. Gubrud needs all the time he can get to heal up before the stretch run.

Towson struggled in the first half against William & Mary last week, trailing 13-10 at the break. The Tigers flipped the switch in the second half, outscoring the Tribe 19-0 the rest of the way, winning easily. Towson matches up against another team at the bottom of the CAA this week, Albany. After that, the Tigers finish with what may be the top four teams in the CAA.

Wofford suffered its first conference loss in convincing fashion falling to Furman by 20 points. The Terriers were starting to look like a team ready to run the table in conference and secure a seed in the playoffs. But that was all derailed in a poor performance against a rival Paladin team playing for their lives. Wofford has a chance to get right back on the saddle this week when they take on the current leader in the SoCon, East Tennessee State. The winner of this game could receive the automatic bid to the playoffs next month.

Last Week: lost to Delaware 28-16
This Week: vs. Richmond

Elon followed up its huge win at James Madison by losing at Delaware. Star running back did not play at all for the Phoenix with a hamstring issue – the same hamstring that cost him the last half of the 2017 season. The news got worse from there as quarterback Davis Cheek left mid-game with what is feared to be a torn ACL. These injuries will be tough for the Phoenix to recover from as they head down the rest of their schedule. Elon has a three game home stand, starting this week with Richmond, before travelling to Maine the last week of the season.

Illinois State ran for 409 yards in their easy win over Southern Illinois last week. The Redbirds allowed only 202 on defense, suffocating the Salukis. The Redbirds get to prove they belong in the conversation as one of the top teams in the FCS over the next two weeks. They travel to Fargo to face the top ranked Bison this weekend and host South Dakota State next weekend. They will need to win at least one of these games to remain in the conversation for a playoff seed.

Stony Brook won their game against New Hampshire the way they have been winning all year: with a dominant run game and strong defense. The Seawolves got 163 yards on the ground from Donald Liotine and the defense scored twice in the easy win. This week, Stony Brook hosts Rhode Island and their strong passing attack. The Seawolves will look to control the game by running the ball and winning the time of possession

Another week, another game without allowing a touchdown by the Colgate defense. The Raiders have only conceded 23 points in their six games this season, 17 of which came in the season opening game. With a defense this solid, Colgate is not a team any of the FCS will want to see in the first round of the playoffs. Colgate looks to continue their touchdown free streak against Georgetown in a couple of weeks.

Last Week: OFF
This Week: at Incarnate Word

McNeese State’s bye week came at the right time. The Cowboys have struggled to wins the last two games, so they needed the week to regroup and prepare for the second half of their season. The Cowboys travel to play an improved Incarnate Word team this week before hosting Central Arkansas next week

Rhode Island yielded a field goal to Maine on the last play of the game in their loss last week. It as a back and forth contest, but the Rams defense could not hold the lead in the fourth quarter. Rhody will have to tighten up the defense the rest of the way or they could find themselves on the wrong side of the scoreboard more than they have so far. This week they take on a tough Stony Brook team on the road. The loser of this game may slip toward the playoff bubble.

Like Princeton, Dartmouth is an Ivy league team that can put up points. The Big Green run the ball effectively, but also can put it in the air efficiently with Derek Kyler when necessary. Last week the Big Green trounced Sacred Heart in an out of conference game. This week they will look to continue their unbeaten start against Columbia.

Last Week: beat The Citadel 26-23
This Week: at Wofford

East Tennessee State continued its unbeaten start in Southern Conference play by fending off a challenge from the Citadel. In conference play, the Buccaneers have played a number of close games, so they do not get rattled by the scoreboard late in the game. This week, they will get the opportunity to solidify themselves as the best team in the conference when they play at Wofford, a team coming off a tough loss.

Central Arkansas continued to quietly win games, defeating SFA last week. The Bears are a bit of an afterthought in the FCS playoff race, but will get the opportunity to show they belong next weekend when they play at McNeese State. Before they get there, however, the Bears have to take care of business this week against Northwestern State. A win the next two weeks will really shake up the Southland race

For the second straight week, Kenny Doak hit a game winning field goal on the last play of the game to keep the Black Bears unbeaten in the CAA. Maine is one of two remaining teams in the CAA without a conference loss. That streak should continue when the Black Bears travel to play an undermanned William & Mary squad.

Sam Houston has been a completely different team with Ty Brock under center. With the change at quarterback, the Bearkats have clearly reinserted themselves in the Southland race and look like a solid bet for a playoff spot. The Bearkats have the ability to run the table the rest of the way, starting with their game at Lamar this week.

Northern Iowa has played a very strong schedule to start the season. The Panthers hung with North Dakota State for three quarters before eventually falling. They avoided the letdown last week in a big win over South Dakota, led by Eli Dunne with 257 yards and four touchdown passes. This week, the Panthers host South Dakota State and have the opportunity to solidify themselves as a playoff team. A loss would place them squarely on the bubble, so this week’s game is huge.

Montana State escaped against Idaho last week when the Vandals missed an extra point that would have tied the game late in the fourth quarter. The Bobcats were let off the hook, and will need to gain some momentum the rest of the way if they want a playoff spot. This week, they travel to Weber State with an opportunity to put themselves in the playoff race. A loss probably ends all chance the Bobcats have to make the playoffs

Last Week: lost to Florida A&M 22-21
This week: at Bethune-Cookman

North Carolina A&T jumped out to a 21-6 halftime lead over Florida A&M, but they could not hold it. The Rattlers came roaring back with 16 points in the second half, culminating in a 26 yard game winning field goal from Yahia Aly. With the loss, the Aggies MEAC title hopes took a huge hit. If they can finish the season strong, they could still be in line for an FCS playoff berth.