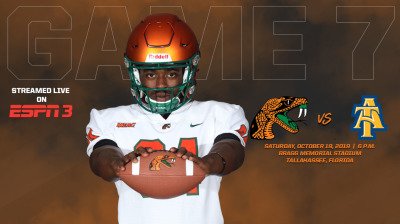 As of Week 8, the top four teams in the MEAC have gone 17-5, with four losses to FBS teams. The only loss to FCS competition is when two of those teams played each other last week, when South Carolina State fell to FAMU 42-38. This week, the MEAC has a another match up that is garnering national attention, and for good reason.

If it weren’t for their self-imposed sanctions, FAMU would be a part of the MEAC title race and the Celebration Bowl, and would probably have more eyes on them for national rankings. But such is their fate, they will be playing what can only be described as super spoiler for the rest of the top MEAC teams. They already handed South Carolina State their only FCS loss of the year last weekend in Orangeburg in a game that had a fantastic finish. If FAMU wants to do the same thing with A&T though, they’ll have to make some big improvements to their special teams play and protect the football a lot better.

Key Player: QB Ryan “Sunshine” Stanley will be key if FAMU wants to add another spoiler trophy to its case this year. While he orchestrated a brilliant game winning drive last week against SCSU, he was a bit too careless with the ball for my liking. He will need to be a lot more precise going up against an A&T defense that has a secondary that has a nose for the ball.

At this point I don’t know why any of us are surprised to see North Carolina A&T doing what they have
done for the last 4 years or so. When it comes to HBCU schools, they reload like the HBCU teams of old, and their impact can be seen across the spectrum as other schools step up their own programs. The Aggies will be coming off a bye week, and I am sure they will be ready to head down to Tallahassee to stake their claim as the top team to beat in the MEAC once again. Some national pollsters begrudgingly must once again realize that A&T is the real deal, especially after beating FCS playoff contender Elon of the CAA this year and running through their other FCS opponents. It’s up to the Aggies to make a statement this weekend against another team that hasn’t lost to an FCS opponent this year in FAMU.

Key Player: The Aggies defense will be what makes or breaks this game. They have a well balanced offense that can put up points with little to no problem, but they will need to stop what can be a very high powered FAMU offense. If Ryan Stanley of FAMU is as erratic with the ball as he was last week though, the A&T secondary will have a field day knocking down balls and getting interceptions.

Fearless Prediction: If you don’t plan on watching this game live and have ESPN+, you absolutely need to watch it on replay. I expect a hard hitting match that will likely be decided between FAMU’s offense and the defense of A&T. FAMU is coming off the high of a great win at SCSU and A&T off of a bye, so both teams will be rolling into the game in good spirits. I expect points, but not a shootout. But despite my early season prediction, I think the Aggies are just a little more stable and consistent at this point than the Rattlers. A&T will go up by 2 scores in the 4th to put the game away. North Carolina A&T 35, Florida A&M 24.

Fearless Predictions for the rest of the slate:

The Bulldogs came so close last week with excellent defense and exceptional special teams play to
holding off FAMU at home. They will need to stay focused with spoiler minded Morgan State coming to town, and the Bears have a knack for doing just that. This isn’t the South Carolina State of late though, that was all defense and nothing else. I expect the Bulldogs to get up and show out. They’ll jump all over Morgan State early to put any thoughts of an upset to bed. They’re still in a race for the Celebration Bowl and an at large bid after all. South Carolina State 38, Morgan State, 14.

The Hornets have been disappointing this year in terms of us thinking they would build off late success from last season. They really should not have trouble with Merrimack, though. While Merrimack has played a few FCS teams close this year, this will be Delaware State’s best chance for a win this year if I’m being honest. So, I expect the players and coaches to go all out for this game. Delaware State 28, Merrimack 17.

The Spartans don’t have the record to show it, but they are a formidable team. With close losses to both FAMU and FBS rival ODU, the Wildcats would be wise to take Norfolk State seriously. That said, I expect Bethune-Cookman to know what exactly is at stake here. Like SCSU, they are not only playing for a Celebration Bowl appearance, but also a potential at large birth into the FCS playoffs. They can’t afford a loss to anyone but the top 4 teams in the MEAC. Bethune-Cookman 38, Norfolk State 21.