Whoever drew up the 2019 Ohio Valley Conference football schedule is probably thinking rather highly of themselves right about now. It’s been a masterful schedule and one that dreams are made of – or nightmares, depending on your outlook.

Five teams are still in contention for the OVC title and the automatic berth in the upcoming FBS playoffs.

UT Martin entertains Jacksonville State in what is one of three key games in the league. Austin Peay tangles with Eastern Kentucky and Southeast Missouri faces Tennessee State in the other key matchups this weekend in league play. Tennessee Tech travels to Murray State in the other OVC, while winless Eastern Illinois has an open date.

Jacksonville State finds itself in unfamiliar territory as the 2019 season heads into the pivotal stretch. After dominating the Ohio Valley Conference by winning 39 of 40 league games over the past five seasons, 2019 has seen JSU drop two conference games already and another will severely dampen the prospects for a postseason berth for the Gamecocks.

To remain in contention for a possible sixth straight OVC championship JSU will have to turn back UT Martin, the current conference path setters. Oh, the Skyhawks also have one of the top defenses in the conference this year. That makes things even more difficult for the Gamecocks to remain the rulers of the roost in the OVC.

But, despite the lofty achievements of the Skyhawks this season, it is not all gloom and doom for Jacksonville State. Several players are certain to make their presence felt on Saturday and just how successful UT Martin is at limiting their impact will go a long way in figuring how the conference race will play itself out of the final weeks. JSU has conference games remaining against Tennessee Tech (Nov. 9) and Eastern Kentucky (Nov. 23) after this weekend’s encounter.

Key Players: QB Zerrick Cooper is among the best in the OVC and the nation. He has completed nearly 60 percent of his passes (195-327) for 2,541 yards and 21 touchdowns on the season. He has also added 231 yards rushing and five touchdowns. Cooper’s offensive numbers would be even more impressive if not for the fact the JSU offensive line has allowed 20 sacks on the year. The 10 interceptions thrown by Copper has also hampered the Gamecocks on the season.

Josh Pearson and Jamari Hester have both caught 43 passes for JSU. Pearson has accounted for 723 yards (16.8 ypc), while Hester is close behind with 697 (16.2 ypc) on the season. Peason has scored 11 touchdowns, while Hester has found paydirt four times.

The running game is manned largely by Michael Matthews. He has rushed 93 times for 455 yards (4.9 ypc) and four touchdowns. 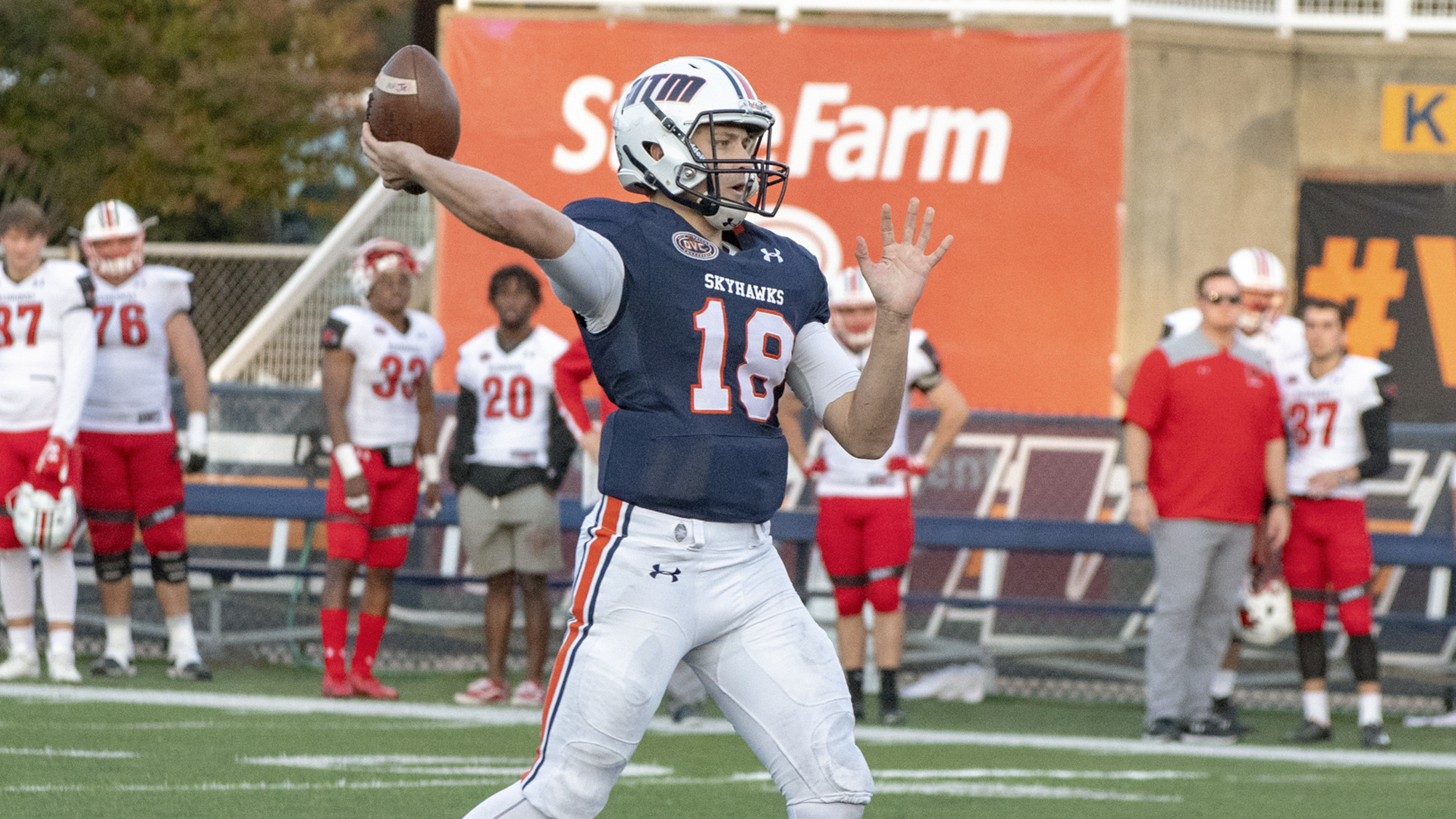 A win over JSU will put the Skyhawks in the catbird’s seat for their first OVC championship since 2006.

UT Martin paces the Ohio Valley Conference standings with a 4-1 mark in league play and a win will keep the Skyhawks atop the leaderboard. A loss will drop them into second place while the winner of the Austin Peay vs. Eastern Kentucky game will take over the lead with a 4-1 record in OVC action. They have conference games remaining against Austin Peay (Nov. 9) and Tennessee State (Nov. 16).

The Skyhawks have a potent 1-2 attack on offensive with the running game and passing game compiling numbers that prevent opposing defenses to focus on stopping one or the other. Through in one of the top defensive units in the conference and its little wonder the Skyhawks have positioned themselves so nicely this season.

John Bachus has operated the offense brilliantly. He has completed 117-of-204 passes for 1,645 yards and 11 touchdowns. He has only thrown six interceptions. Bachus’ favorite receivers have been Terry Williams and Colton Dowell. That tandem has combined for 53 receptions and nearly 800 yards. Williams leads the way with 32 receptions for 341 yards (10.7 ypc), while Dowell has proven even more explosive by racking up 427 yards (20.3 ypc) on just 21 catches. Dowell has scored three touchdowns and Williams has added two of his own. A total of eight difference receivers have caught scoring passes for the Skyhawks this season. Peyton Logan paces the rushing attack with 711 total yards on 103 carries and six touchdowns.

It’s homecoming in Martin and there will be reason to celebrate: UT Martin 28, Jacksonville State 18 The pressure continues to mount for Eastern Kentucky and just how well the Colonels respond beginning Saturday will prove to be a make or break proposition. A loss will all but knock EKU out of playoff contention and plenty of eyes will be on the what transpires between UT Martin and Jacksonville State.

The Governors will rule the day by the narrowest of margins: Austin Peay 17, Eastern Kentucky 16

Southeast Missouri has scored critical wins in each of the past two weeks as the Redhawks look to capture the OVC championship for the first time since 2010. SEMO can ill afford a letdown on Saturday and if the Redhawks doubt the wisdom behind that logic all they need to do is ask Austin Peay of the perils of allowing a win to slip away.

There are two things working in Murray State’s favor as the Racers hope to reach the FCS playoffs: a wing and a prayer. And while the prospects of postseason play are a long shot, a stumble on Saturday will make the wing and prayer both distant memories. Tennessee Tech, on the other hand, is simply looking for something to use as motivation and momentum heading into the upcoming offseason. It’s gonna be close, but MSU prevails in the end.