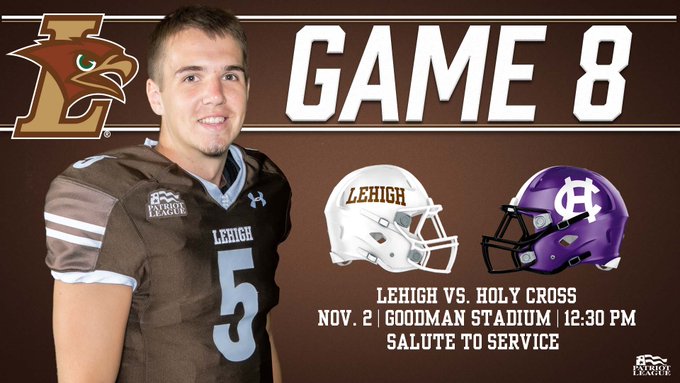 Don’t expect anything chill at Murray Goodman Stadium this Saturday, where the combined heat of the Holy Cross Crusaders (4-4, 2-0) and Lehigh Mountain Hawks (4-3, 3-0) should be radiating from both teams.

Though all week Lehigh head coach Tom Gilmore has been adamant that this is supposedly “when push comes to shove, it’s just another football game”, it clearly isn’t. That’s because for the first time, Gilmore is leading his Mountain Hawks against the team that unceremoniously terminated his contract mid-season two years ago.

Similarly, the upperclassman Crusaders are just as eager to line up against the head coach that recruited them and didn’t manage to deliver them a Patriot League championship. Better than most, they realize the heat that coach Gilmore will be infusing into his young team – maybe not publicly, but privately.

“We know they’re going to be on fire,” Holy Cross RB Domenic Cozier said in the run-up to this game. “We know Lehigh is a different team than last year, and we know Coach Gilmore is going to have those guys hyped. It’s going to be exciting.” The history between Gilmore and the Lehigh and Holy Cross football programs runs fairly deep.

From 2000 to 2003, Gilmore joined the Mountain Hawk coaching staff as Lehigh’s defensive coordinator, where he quickly developed a reputation for bringing fire and passion to his defensive units. Some days it didn’t feel like the walls in the coaching booth were safe when he was there.

During that four year stretch, Lehigh and Holy Cross played three times, with one of the meetings cancelled due to the attacks on 9/11, 2001. Though it was a rough period for Holy Cross football in general, the Mountain Hawks held the Crusaders under 20 points in all three games they played, winning all three meetings.

When the job for Holy Cross’ head coaching position became open in 2004, Gilmore interviewed for the job and got it, and hired some of the coaches whom he worked with at Lehigh. Within two years, he returned to Murray Goodman in a rainstorm and guided his Crusaders to a 13-10 win on a messy, waterlogged turf.

Gilmore built the Holy Cross program over a thirteen year period from a broken program into one that became a perennial contender in the Patriot League.

In the eleven years since Holy Cross gave up their football scholarships in 1992, the Crusaders had one winning record. During his time in Worcester, he routinely guided his teams to winning records, finally achieving a Patriot League championship and FCS playoff appearance in 2009.

That team, who boasted QB Dominic Randolph and an offense with an amazing array of weapons, earned their championship with a pair of tough, close games versus Lehigh and Lafayette in back-to-back weeks. In the playoffs, they were huge underdogs against Villanova, but battled valiantly and gave the Wildcats a scare before falling 38-28. Villanova, under hall of fame head coach Andy Talley, would win the FCS National Championship that season.

Yet a consistent string of titles eluded Gilmore and the Crusaders. There were some agonizing games where the Crusaders simply couldn’t get over the hump. There was the heartbreaking 24-21 defeat in the Bronx to Fordham in 2007, where a late interception did in their title chances, and the 28-27 loss to Colgate on the final weekend of the season in 2008, where a win would have given them the title.

From Worcester to Bethlehem

Gilmore was somewhat of a surprise candidate in Bethlehem to many fans when beloved head coach Andy Coen stepped down in December of 2018. Gilmore, who was fired in mid-season two years prior – unheard of in the Patriot League – came in with a bunch of other head coaching candidates, but rose to the top of the heap quickly. Nobody else could rival his knowledge of the Patriot League, its recruiting challenges and his experience.

In 2018, Holy Cross hired Bob Chesney, who in many ways seemed like a younger, somewhat calmer version of Gilmore.

Chesney, who was the head coach at nearby Assumption College, had worked his way through the ranks, winning everywhere he had been.

“I just look at it and (see) the potential and the hope and the future and the excitement that I have for what can be done here and what I think will be done here,” he said.

He played his college football at Dickinson in Carlisle, PA, and spent time in King’s College at Wilkes-Barre and Delaware Valley College in Doylestown. In so many ways the same areas and circles join both head coaches – playing in Eastern Pennsylvania, coaching in both Pennsylvania and the Northeast.

Now, too, Lehigh and Holy Cross bring in long conference winning streaks to Murray Goodman. The Crusaders have won seven straight league games under Chesney; Gilmore is undefeated in Patriot League play since being hired as the Mountain Hawks’ head coach.

The genesis of a great head coaching battle could be in play this Saturday, with coaches with similar backgrounds, similar types of teams, but subtle differences in style. Gilmore and some of Lehigh’s staff recruited the upperclassmen at Holy Cross; Chesney is from the area and knows what it takes to win tough Patriot League football games. Chesney also knows how to beat Lehigh; last year, his Crusaders pulverized Lehigh 56-0 last year, something that Lehigh LB Pete Haffner was all-too-aware of this week.

“They embarrassed us last year,” he said after the Mountain Hawks beat Georgetown this week. “We’re ready. We want to come in and get after them, put a spanking on those guys. And we’re excited. We’re just going to keep that one practice that time, get better, preparing to our best of our ability.”

Both Lehigh and Holy Cross look more and more similar when you look closely at both teams.

Though both squads have a lot of youth on their rosters, both teams have holdover senior leaders that have helped shape their teams and put them in this battle of undefeated teams.

Holy Cross S Chris Riley and RB Domenic Cozier are seniors and team captains that have provided great leadership for the Crusaders and have stood out. Riley leads Holy Cross with 3 interceptions, while Cozier leads the team in rushing yards (493) and is a speedy. dual threat running and receiving the ball.

For Lehigh, WR Dev Bibbens and LB Keith Woetzel are seniors that have emerged as critical pieces to both teams. Bibbens leads the team in receptions (44), yards (540) and receiving touchdowns, including one in overtime to beat Fordham a few weeks ago. Woetzel is first in the nation in solo tackles per game (7.7) and third in sacks per game (1.21).

Both Holy Cross and Lehigh have tested themselves out-of-conference with some great competition, with Holy Cross’ 13-10 upset win over New Hampshire really standing out, won by a forced fumble recovered in the end zone for the game-winning score. In a span of four games, Lehigh has won all of them in the final two minutes of play, including back-to-back walkoff wins.

Both teams are young, but have very good senior leadership. Both head coaches have praised their team’s “grit” and resolve, but also have voiced concerns about depth.

And there’s every indication that both teams are going to be breathing fire this weekend, too.

Though both teams are trying to downplay the “championship vibe” of this game, with the stunning fall of preseason favorites Colgate and most of the rest of the Patriot League guaranteed losing records, it’s clearly going to be a game that brings out the passion in everyone.

“Walking on that field on Saturday confident in what we’re doing, confident because we’re practicing and preparing hard,” Chesney said this week, “then I think all that outside noise goes away. That’s what we talked about with the team — people will build this up to be the Patriot League championship. Don’t believe that. We have three games left to play after it.”

Two undefeated teams in @PatriotLeagueFB clash this weekend on @Stadium! It’s going to be a good one! @NCAA_FCS