The Southern Conference did not get off to a great start in 2019, picking up only two out of conference wins. The poor weekend was punctuated by early favorite Wofford getting easily handled by South Carolina State, a team most picked to finish in the middle of the MEAC. Was it a blip in the radar? Or is the Southern Conference headed for a down year?

Chattanooga’s win against Eastern Illinois wasn’t flashy or particularly dominant, but the Mocs did what they needed to get out of the game with a victory. With a tough non-conference schedule that was a game they had to have. If the Mocs want to make the playoffs, theyre going to need to win either this week’s game against Jacksonville State or their game against James Madison in two weeks. The way JSU played in week one, the Mocs have to feel like they have a shot to go down to Alabama and come out of there 2-0.

Key Player: QB Nick Tiano was good not great in the opening win. He knows he will have to be better moving forward for the Mocs to pick up victories against tougher opponents. Tiano threw two interceptions against Eastern Illinois. He is talented, but can Tiano put all of the attributes together to lead the Mocs where they need to go?

The first game of the season could not have gone any worse for Jacksonville State. The perennial OVC power went to Southeastern Louisiana and got embarrassed by Chason Virgil and the Lions. The Gamecocks came into the season with Frisco on their mind. But if they cant clean up the mistakes, the only way they will be in Frisco will be the same as you and I – by purchasing a ticket. JSU will be looking for a big bounce back in their home opener. Was last week just a bad week or a sign of things to come?

Key Player: During last week’s game against Southeastern Louisiana, I likened QB Zerrick Cooper to Jameis Winston. Like Winston, Cooper has the talent to be one of the top quarterbacks in the country. However, also like Winston, Cooper tends to make the worst plays at the worst time. Both sides of that coin were apparent last week where Cooper threw for 414 yards and two touchdowns. But he also threw two awful interceptions, one going for a pick six as the Gamecocks were trying to get back into the game. 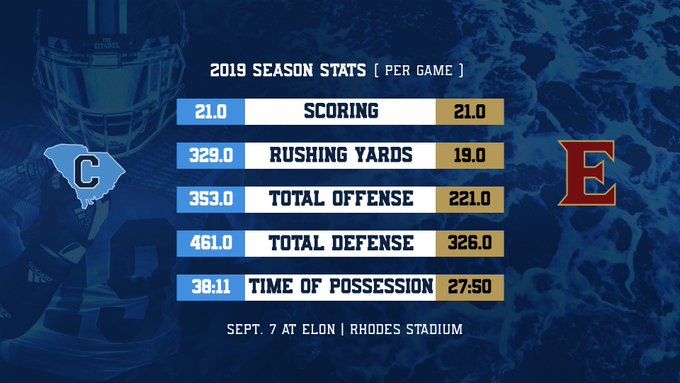 VMI plays a D-II opponent in what may be their best opportunity for a win this year. VMI 41, Mars Hill 20

This is a must win non-conference game for two teams who dropped openers against strong FCS opponents. The winner will have a shot to still gain an at large bid if needed while the loser would be relegated to winning their conference to make the playoffs. This game features two teams that like to be physical in the run game. The Citadel will wear down Elon with the triple option in the fourth quarter. The Citadel 21, Elon 20

This game was scheduled just this week after Presbyterian cancelled their opening game against Stetson due to weather. Mercer was willing to schedule this game to give them a 12th game which could go a long way on selection Sunday. Mercer 27, Presbyterian 12

Is Georgia ripe for an upset after their big upset victory over Tennessee? Furman will give them a great game, but the Paladins will fall just short. Georgia State 24, Furman 20