Week one is in the books in the FCS. There was only one FCS upset over an FBS team, but another 11 teams came within one score of an upset. Many of the top teams played FBS competition, so where was not a lot of movement with those teams in the polls. Bad losses by Jacksonville State and Wofford have plummeted both of those teams. 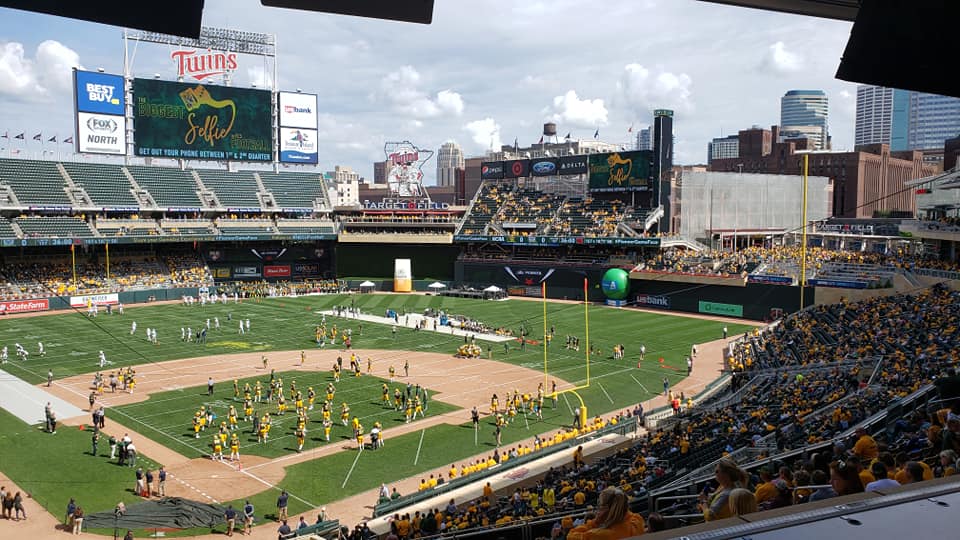 The Bison went to Minneapolis and did what was expected; blow out Butler. Trey Lance looked like anything but a freshman in his first game as the starter.

The Dukes ran for 138 more yards than West Virginia. However there were too many mistakes on the offensive side and the Mountaineers escaped with the 7 point win.

Not much can be learned from the Eagles loss to Washington. The Huskies are one of the top teams in the FBS. Eastern Washington will be fine. But it will take a few more weeks to see the real Eagles.

The Jackrabbits put up a good fight against Minnesota, entering the fourth quarter with a lead. But they could not hold it. It was a valiant effort that just fell short.

Chris Ferguson threw for over 400 yards in just three quarters of work. The Black Bears hit on all cylinders in their game against an overmatched Sacred Heart.

The Aggies fell to Cal which only cost them one spot in the poll this week. Like a lot of teams, they competed well against an FBS opponent, but didn’t pull the upset.

Nicholls couldn’t contain the Kansas State run game and were never competitive in their opening game. The result says more about the winning culture that Chris Klieman brings to the Wildcats than the deficiency of the Colonels.

Tom Flacco led a game winning drive in the last three minutes to lead the Tigers to victory over a quality team from The Citadel. This victory will look good on their resume in November.

The Bobcats lost big to Texas Tech. That matters little. But this week matters a lot. THe Bobcats host Southeast Missouri State in an early season marquee matchup. The winner of this game will shoot up the rankings.

The Panthers pushed a ranked FBS Iowa State team to the brink and then some, ultimately falling in triple overtime. Northern Iowa showed that they are a team to contend with this year. Lets see if they can continue their upward trajectory as they move through the season.

Illinois State is another team who gave a strong effort against an FBS opponent despite taking the loss. ISU and Northern Iowa showed that the middle of the MVFC will be just fine.

Booooorrrrring. That’s the only way to describe Weber State’s loss to San Diego State. If the Wildcats had any offense at all, they take that game. But don’t overlook how strong the defense is having allowed only six points. That’s how Weber is going to have to win all year. I am not sure its sustainable.

The Paladins looked much more physical than they have over the last couple of years in their win over Charleston Southern. The Paladins face FBS opponents over the next couple weeks. If they scalp one of those, they could be the SoCon favorite, if they already aren’t.

Central Arkansas stormed back with 21 straight points in the fourth quarter to pick up the only FCS over FBS win in their victory over Western Kentucky. The Bears won behind the connection of Breylin Smith (324 yards passing, 3 TDs) and Lujuan Winningham (222 yards receiving, 3 TDS).

Princeton doesn’t start its season for a couple more weeks.

The Redhawks allowed Southern Illinois to hang around for a while before putting the hammer down. Zach Hall picked up where he left off in 2018, registering 19 tackles.

Montana announced their intent to return to relevance in the FCS with a strong win over South Dakota. Of course, the season will only be a success if they can find a way to beat Montana State and break their losing streak against their in state rivals.

The Owls did what they should have done to a weak NAIA opponent, smashing Point in a game that was pointless to even schedule. A trip to Ohio to play Kent State is followed by the Owls’ first FCS matchup against Alabama State. Then we will start to see what Kennesaw State really is.

North Carolina A&T got a 52 yard field goal at the gun to defeat Elon. The Celebration Bowl favorites put a strong win under their belt in week 1 for the second year in a row.

Elon lost at the gun to NCAT. That makes this week a near must win against The Citadel in non conference action. Dropping to 0-2 would force Elon to win the auto bid in the stacked CAA to make the playoffs.

Like Princeton, Yale doesn’t begin play for a couple weeks. Only then we will know if they belong. The Sycamores held a late lead against FBS Kansas, but couldn’t close the deal. Nonetheless, Indiana State showed that their finish to 2018 was not a fluke, but a continued momentum into 2019.

The Bearkats were one of the FCS teams to stay within a score of an FBS opponent. Sam Houston put up over 30 points, showing that the offense may be back to the potency they expect

The Blue Hens easily handled in state rival Delaware State. Pat Kehoe played well. If he continues to do so, Delaware is a team to be reckoned with in the CAA