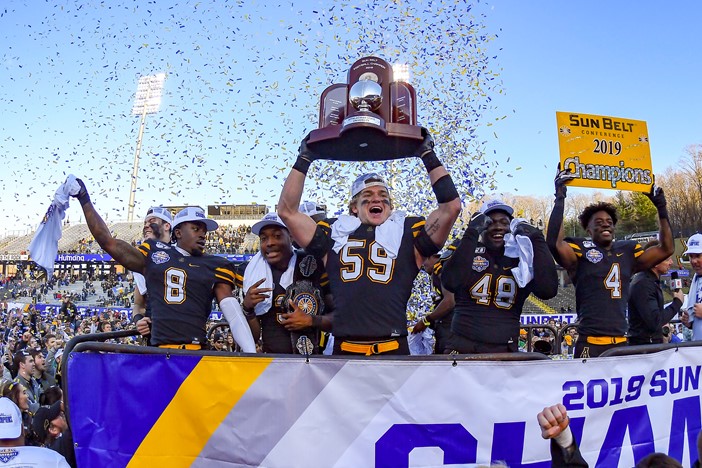 BOONE, N.C. — For much of an incredibly successful football season, 20th-ranked Appalachian State had been castigated for its propensity for slow starts. But in Saturday afternoon’s Sun Belt Conference championship game, the Mountaineers raced out of the gate about as fast as Darrynton Evans can run a 60-yard dash.

Evans scampered 58 yards with a screen pass from quarterback Zac Thomas on a third-and-15 play less than two minutes into the game and Appalachian was on its way to the decisive 45-38 victory over Louisiana-Lafayette in the second consecutive meeting between the two teams in the conference title clash at Kidd Brewer Stadium.

Evans scored three touchdowns in the first quarter to give the Mountaineers a 21-0 lead and App State’s defense forced three Ragin’ Cajun turnovers as ULL dug itself a hole it couldn’t uncover.

For his effort in piling up 162 all-purpose yards and scoring twice by pass and once on the ground, the junior speedster was named the game’s most valuable player for the second year in a row.

Still leading by 21 points at 45-24 with just over four minutes to play, the Mountaineers (12-1) allowed two late scores to make the final margin closer than it really was on the field.

“We knew they hadn’t won a game (when) trailing, so that was our goal this week, to start off fast and let them play from behind,” said Zac Thomas, who was brilliant in his execution, while completing 9-of-17 passes for 149 yards and two touchdowns and contributing 66 yards to the Mountaineers’ powerful ground attack. “At the beginning, we were 5-for-5 on touchdowns (on the first five drives of the first half). We were just rolling and no one could stop us at that point.”

As fast as Appalachian started, Louisiana (10-3) began sluggishly and its proved to be a lethal recipe for the Cajuns.

“We made a few too many mistakes to be a champion today,” said ULL coach Billy Napier, whose career record as a quarterback at Furman and a head coach slipped to 0-5 at Kidd Brewer Stadium. “It’s really that simple.”

Of course, Napier is best remembered by Mountaineer fans for throwing the interception in the final seconds to Josh Jeffries and Derrick Black’s two-point, defensive conversion that led to Appalachian’s wild, 16-15 victory over Furman in the 2002 Miracle on the Mountain game.

Not Much of A Speech, Though

ASU coach Eliah Drinkwitz said he had given his shortest pregame speech of the season on Saturday.

“These guys were raring to go and they knew what it was going to take,” Drinkwitz explained. “It also comes down to situational football, winning third downs and executing under pressure. Those things showed up in the football game and that’s why we won”

As ULL adjusted to the Appalachian offense in the second half, Mountaineer free safety Josh Thomas hammered what was ultimately the final nail in the Cajuns’ coffin of championship hopes in the third period.

Dropping down into the defensive box as he anticipated a running play, Josh Thomas went undetected by Louisiana quarterback Levi Lewis on a play action pass. Lewis’ throw was picked off by the ASU senior and returned 16 yards for the touchdown, with a caravan of blockers leading him into the end zone.

That gave Appalachian a 42-17 lead with less than six minutes left in the third quarter — an advantage that proved insurmountable.

Lewis battled valiantly in the second half to finish 24-of-46 for 354 yards passing and four touchdowns, but it wasn’t enough to derail the Mountaineers.

Defensive tackle E.J. Scott, who has played the best football of his ASU career in the past several weeks, set up the Mountaineers second touchdown with his five-yard, tackle-for-loss, forced fumble of Raymond Calais and fumble recovery in the first stanza.

A Zac Thomas lost fumble and the Zi’Yon Hill recovery at the ASU 12 gave ULL the chance to cut into Appalachian’s 42-24 edge later in the third period, but Lewis was sacked by Demetrius Taylor for a 25-yard loss on third down that included an intentional grounding penalty. Cajun place-kicker Stevie Artigue then missed his 52-yard field goal, coming up just short.

Such missed opportunities proved fatal to Louisiana after its slow start and vaulted Appalachian into bowl season with its first 12-win season since the 2006 FCS national championship campaign (that team went 14-1) and its most successful season since moving to the Football Bowl Subdivision in 2014.

The Mountaineers will find out on Sunday whether that surge of success will be enough to push them into the Cotton Bowl, the Belk Bowl, or the New Orleans Bowl.