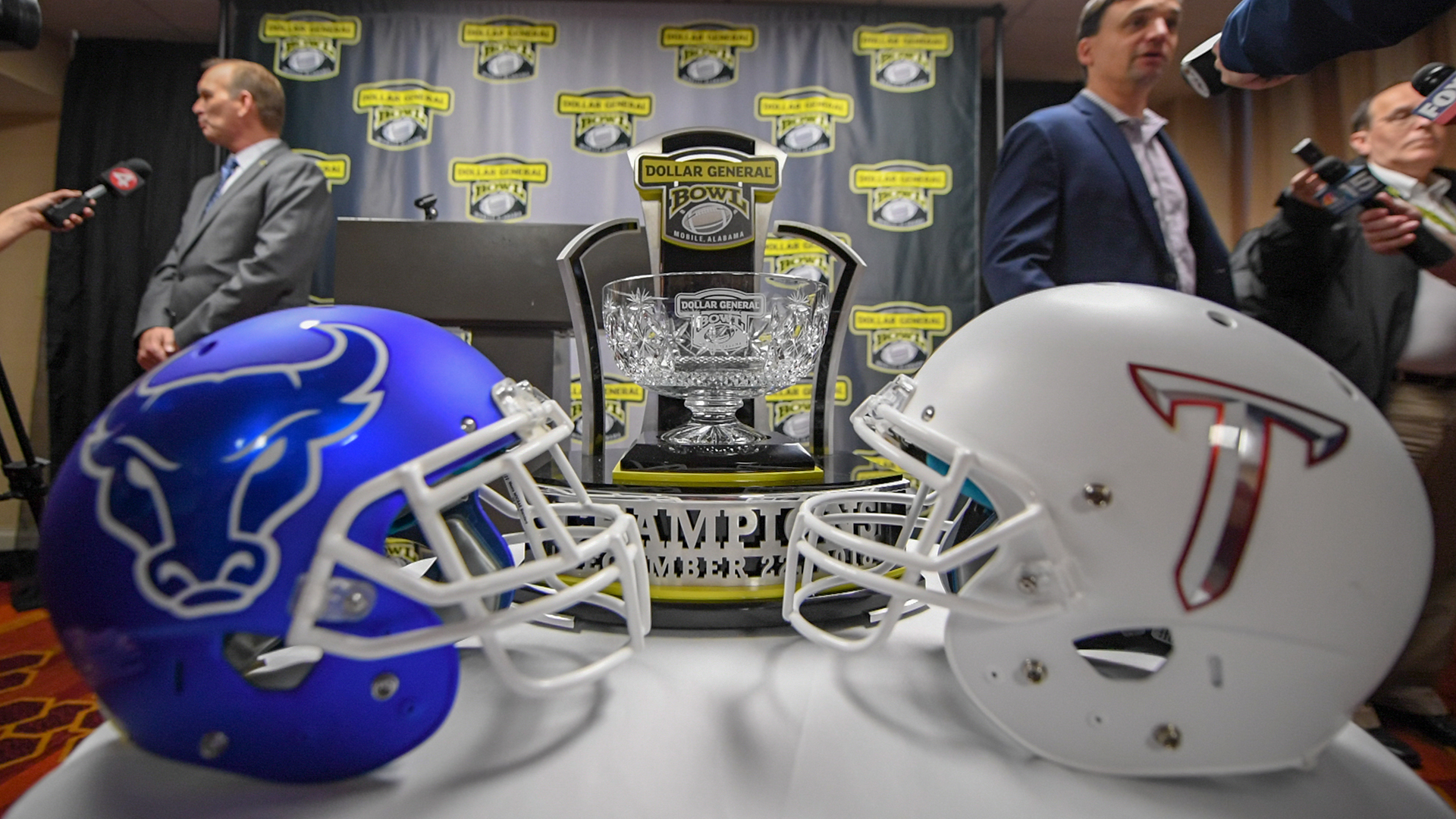 The Trojans has been one of the most powerful Group of Five teams in the country under coach Neal Brown in recent years. In his four seasons, the Trojans are 34-16 and enter this game with a 9-3 record.

A win over Buffalo would give the Trojans at least 10 wins in a season for the third consecutive year, and the only three times in program history. This will be Troy’s eighth bowl game, and the Trojans are 4-3 in their first seven postseason games.

Troy started the season with a loss to Boise State at home. But then Troy won on the road at Nebraska as part of a 5-1 start.

Starting quarterback Kaleb Barker went down with a season-ending injury in Week 6, but Sawyer Smith filled in admirably for the second half of the season, eventually setting up a showdown with Appalachian State for the Sun Belt East crown in the regular season finale. App State would prevail to take the division, give Troy its lone conference loss of the season and knock the Trojans out of the Sun Belt title game.

Playing this bowl game in its home state, Troy can win its fourth straight bowl game (including three consecutive under Brown) by beating Buffalo.

This will be Troy’s third time playing in the Dollar General Bowl, and it’s gone 1-1 in its first two appearances, beating Ohio in 2016 and losing to Central Michigan in 2010.

Key Player: LB Hunter Reese was named a first-team All-Sun Belt selection for the second straight season. Entering the bowl game, Reese has compiled 59 tackles, 14.5 tackles for loss and 7.5 sacks on the season. He leads the team in both TFLs and sacks and has already surpassed both of his totals (13.5 TFL, six sacks) from 2017. He and the rest of the Troy defense have carried this team this year. Their task will be to hold down an explosive Buffalo offense so how he and the team does will go a long way in this game’s result.

Fantasy Bonus Baby: RB B.J. Smith, who ran for 1,093 yards and 12 touchdowns this season, is the main offensive threat for the Trojans. He is going up against a Bulls defense that can be prone to the running game so he should have a good fantasy game in this one.

Coach Lance Leipold’s squad has already won a school record 10 games and will look to add to that mark in this one. Buffalo went to this school best after finishing 2017 just 6-6.

Aside from a loss to Army, the Bulls cruised through September and October with a 9-1 record, including a 6-0 mark in MAC play. After a loss to Ohio, Buffalo clinched the MAC East title by beating Bowling Green in the season finale. In the MAC title game, Buffalo jumped out to a 29-10 lead, but ended up losing 30-29 to Northern Illinois.

The Bulls employee a strong offense led by the tandem of quarterback Tyree Jackson and wide receiver Anthony Johnson. Buffalo has averaged 39.3 points and eclipsed the 40-point barrier in each of their last three wins.

The Bulls could struggle with scoring points at will, as they’re going up against the 28th-best defense in the FBS. The Trojans conceded 21.2 points per contest, and the most points they gave up in the regular season was 27 to UL-Monroe on September 22.

This is just the third bowl game in Buffalo’s history and this would be its first bowl victory ever in a bowl. Buffalo’s last bowl game was in 2013 in the Potato Bowl–a loss to San Diego State.

Key Player: QB Tyree Jackson was named the MAC offensive player of the year this year and the key will be how he does against the stout Troy defense. He has 2,857 yards and 27 touchdowns through the air and has also scored seven times on the ground thus far this season.

Fantasy Bonus Baby: WR Anthony Johnson started his college career at the junior college level but has been a great threat in his two years in Buffalo. He has combined for 128 catches, 2,300 yards and 25 touchdowns over the past two seasons. Over that span, he is averaging 18 yards per reception. Look for the Jackson to Johnson connection as the main offensive threat and Johnson should have some good numbers from a fantasy point of view.

Jamie: This game features a couple of good teams that nobody knows about. Buffalo 27, Troy 24

Kent: This game just might be the best on this Saturday’s slate of games. The Buffalo offense is better, while the Troy defense is better so something has to give. Playing in Alabama, I like Troy to use the slight “home field” advantage in this one to win on a late score. Troy 31, Buffalo 28

Chuck: Will this be the year of the Buffalo? Troy certainly was one of the better teams in the Sun Belt this year, but were somewhat exposed in the championship game vs. Appalachian State, while Buffalo came within a whisker of beating Northern Illinois in the MAC championship game, 30-29. This could be a surprisingly good game – where, on paper, the Bulls are just a hair better. Buffalo 30, Troy 27