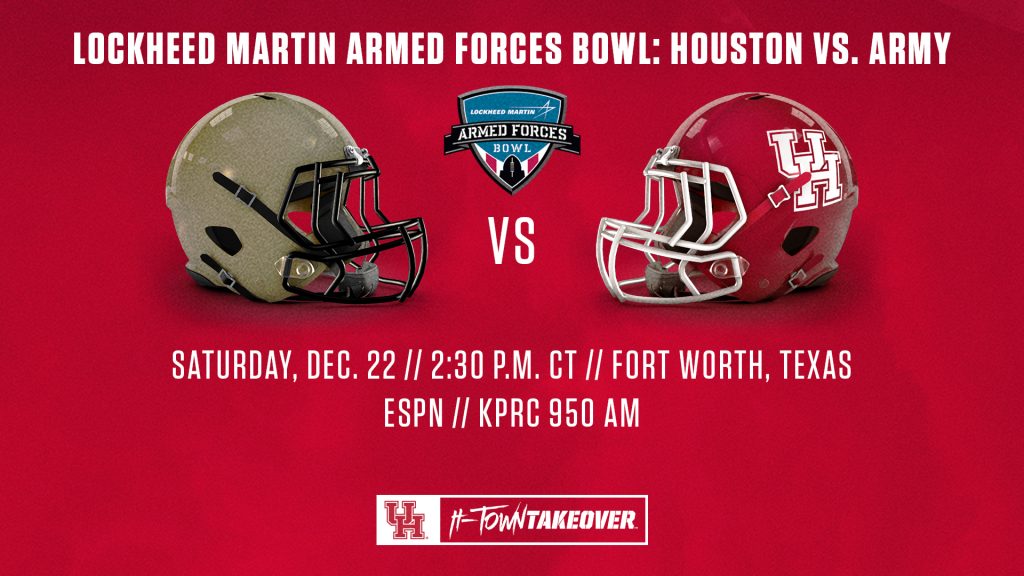 After surging to a 7-1 start and seeming like a frontunner to get to the AAC Championship Game, the Cougars dropped three of their four final games to finish 8-4, including a 52-31 to Memphis to knock them out of consideration for the championship.

However Houston’s 8-4 record made them eligible for the Armed Forces bowl upstate at Fort Worth, Texas.

The game will feature two of the nation’s most prominent offenses as Houston enters the game No. 4 nationally in scoring with an average of 46.4 points per game while Army is No. 2 in rushing offense with 296.3 rushing yards per game.

The Cougars rank 10th nationally and the best in Texas with 10 seasons with at least eight wins since 2006. LSU, Boise State and Oklahoma lead the way with 13 such seasons since 2006 while Georgia is next with 12 such seasons. Also, Houston is one of just four programs nationally with at least 13 wins on two different occasions over the last seven years, joining Alabama, Clemson and Florida State in accomplishing the feat.

Key Player: With banged-up, projected high 1st round draft pick DT Ed Oliver announcing he wouldn’t be participating in the bowl game, it will be critical that someone else steps up for the 1st team all-American on defense. That could be the senior LB Austin Robinson (116 tackles, 13 tackles for loss), but a banged-up defensive front isn’t exactly the way you want to face Army.

Fantasy Bonus Baby: Most of Houston’s pass-happy offense goes through dual-threat QB D’Eriq King (2,982 yard passing, 674 yards rushing, 50 overall touchdowns). He’ll be the fantasy guy to target on the Cougars since in both rushing and passing the ball, head coach Major Applewhite spreads the ball around.

Army will be looking for its fourth consecutive bowl win, including its third straight in the Armed Forces Bowl.

Head coach Jeff Monken’s gameplans are simple – compose grinding, clock-gnawing drives on offense, and shut things down on defense – and that combination has allowed the Black Knights to only allow a hair above 18 points per game and only 300 total yards per game on offense. Against fifth-ranked Oklahoma, Army held Heisman Award nominee QB Kyler Murray was held to 165 yards passing and 71 yards rushing – and needed overtime to beat the Black Knights.

Last time out, Army out-lasted Navy 17-10 to retain the Commanders-In-Chief trophy for the second consecutive year. During its game against the Mids, Army racked up 222 rushing yards compared to just 127 for its opposition. The Black Knights also forced four Navy turnovers which proved critical down the stretch. Key Player: DB Jaylen McClinton was one of the heroes in the Army/Navy game, notching 9 tackles, forcing a fumble and grabbing an inteception in Army’s biggest game of the year. He’ll be facing a few more passes this time out, but if he has another big day, I love Army’s chances in this game.

Fantasy Bonus Baby: RB Darnell Woolfolk is the 5’9, 235 lb finisher of the Army offense, with 885 yards rushing at 14 TDs. He’s very likely to be the finishing touch on more than one scoring drive this Saturday.

Jamie: Houston clearly missed Tom Herrman on the sidelines and the triple option is tough to prepare for if you dont see it on a semi regular basis. Army 21, Houston 13

Kent: While Army has won eight in a row, Houston lost three of its final four games to miss out on the AAC title game. The Cougars are also banged-up on defense and will be without four defensive line starters, including All-American Ed Oliver, who is skipping Saturday’s bowl game in preparation for the NFL draft. This means the Army option game should have a field day. Army 31 Houston 17

Chuck: Having your best defensive tackle choose to be unavailable is a disastrous issue for the Cougars against Army’s potent triple-option attack. Even at fuil strength it would have been tough. Army 35, Houston 27