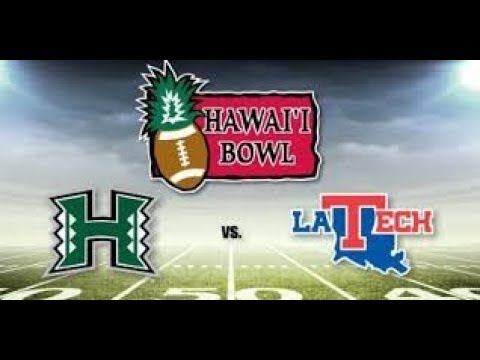 The Rainbow Warriors and Louisiana Tech were once members of the Western Athletic Conference, where they met every year from 2003-11. Hawai‘i leads the all-time series 8-2 including a 44-26 victory in the teams’ last meeting in Ruston, La., in 2011. Additionally, in games played in Honolulu, Hawai’i is 5-0 against the Bulldogs.

Key Player:QB Cole McDonald was the team’s offensive MVP, has thrown for 3,790 yards and 35 touchdowns on the year and ranks among the nation’s Top 10 in six categories. Can he do it one more week?

Fantasy Bonus Baby: WR John Ersua was a semifinalist for the Biletnikoff Award and midseason second-team All-American by the Associated Press and USA Today. The All-American candidate is the FBS leader in receiving touchdowns (16) and ranks fifth nationally in receiving yards (1,343). He’ll look to build on his already-tremendous season with one more game at home.

For the fifth straight season, Louisiana Tech will take the field to compete for a bowl championship as the Bulldogs take on the Hawai’i Rainbow Warriors on Saturday in the 2018 SoFi Hawai’i Bowl in Honolulu.

Saturday’s game will mark the 11th meeting all-time between the two schools with Louisiana Tech winning twice in the previous 10 contests. The Rainbow Warriors have won two straight over the Bulldogs with the last meeting coming in 2011 when both teams were members of the Western Athletic Conference.

Key Player: DE Jaylon Ferguson is one of the best defensive ends in the country. After choosing to return for his senior season with the Bulldogs, Ferguson added to what was already a decorated career for the St. Francisville native with a single-season record 15 sacks. With one game left in his career, Ferguson has already broken the Louisiana Tech and Conference USA records for career sacks (42.5), while he is 1.5 sacks shy of tying the all-time NCAA record for career sacks held by Terrell Suggs (44). He’s likely to get it.

Fantasy Bonus Baby: WR Adrian Hardy led the Bulldogs in receiving after starting every game this season. In the final regular-season game of the season versus WKU, Hardy became the first Bulldog receiver since 2016 to surpass 1,000 receiving yards for the season. Overall, Hardy leads the team with 69 catches for 1,052 yards and six touchdowns, while he ranks in the top 25 nationally in receiving yards and receiving yards per game (87.7).

Jamie: Louisiana Tech has had a nice year, but its tough to travel five time zones away for a game. Hawaii has its normal fast paced offense. Hawaii 41, Louisiana Tech 22

Kent: Both teams can move the football, particularly through the air. However, the Bulldogs have a much better defense at least statistically. Expect the Bulldogs to disrupt Hawaii’s offense more and to come out victorious. Louisiana Tech 36, Hawai’i 26

Chuck: The Bulldogs won’t be intimidated by Hawai’i, and probably have enough offensive firepower to make some hay on Hawai’i’s defense. Lousiaina Tech 35, Hawai’i 28