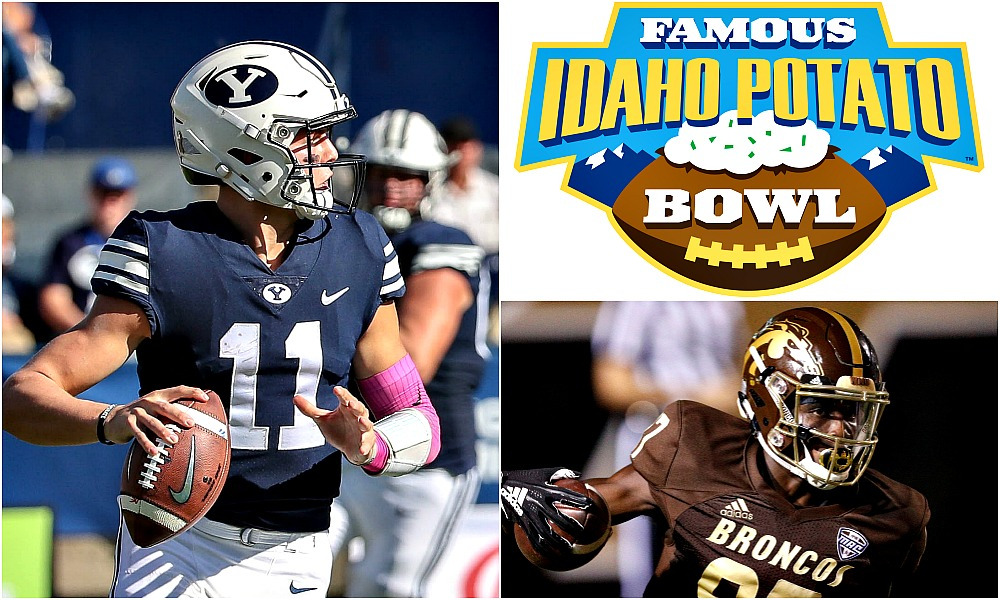 BYU’s streak of 12 consecutive bowl games came to an end when it missed out on a bowl last season. This year’s Potato Bowl will be the 36th bowl game in program history. That ranks fifth all-time among FBS schools.

While this is BYU’s first time in the Potato Bowl, it will not be the first time the Cougars play at Albertsons’ Stadium this season. They lost to Boise State 21-16 on the blue turf earlier this season.

The Cougars did give one of the best upsets this season with its win at Wisconsin but two weeks later it lost big at Washington and later to Northern Illinois at home so it has been a very up and down season.

BYU has won this season with a stout defense. The Cougars have held its opponents to 21 or points or fewer in four of its past five games. The Cougars also rank inside the top 20 in total defense, allowing just 325 yards per game.

The Cougar offense started very stagnant but has found a rhythm late in the season, averaging over 35 points in their final three games.

Key Player: QB Zach Wilson has sparked its stagnant offense over those last three games. Wilson averages about 180 total yards per game and has been responsible for 10 touchdowns in eight appearances. Wilson has shown flashes of play making potential with his combination of scrambling and passing skills and will be the key to the BYU offense in this one.

Fantasy Bonus Baby: LB Sione Takitaki should be a good play considering BYU’s offensive struggles. Takitaki has 100 total tackles and has nine tackles for loss. He’s combined with Corbin Kaufusi to serve as a strong 1-2 defensive punch but Kaufusi is one of the many BYU players out for the season because of an injury. Takitaki recorded 11 or more tackles in four of BYU’s final five games of the regular season.

Western Michigan finished 7-5 and will be playing in its eighth bowl game in program history, and fourth in the last five seasons. It will be hoping the results of this year’s game work out better than previous ones, however, as Western Michigan has a record of 1-6 in its first seven bowl games.

The Broncos started the season 6-2, but lost three of their final four games after starting quarterback Jon Wassink went down with an injury.

But the Broncos did win its last game to ensure a bowl game. The Broncos got above the .500 mark with a 28-21 win over eventual MAC champs Northern Illinois in the final game of the regular season.

This will be Western Michigan’s second time playing in the Potato Bowl. It was last in the game in 2014 when it lost to Air Force 38-24. WMU won its only bowl game in its history a year later in the Bahamas Bowl in 2015 45-31 over Middle Tennessee State.

Western Michigan will want use its dynamic offense to control the tempo of the game. The Broncos are averaging nearly 450 yards and rank 30th in the nation in total offense.

Key Player: QB Kaleb Eleby was forced into the lineup when Wassink was injured. A promising season collapsed with those three straight losses, but Eleby has had a month to fully learn the offense and should have some confidence with the win over NIU to end the season. The freshman has thrown for 917 yards, four scores and two interceptions. He will need to hold onto the ball and use his running game for the Broncos to stay in this game.

Fantasy Bonus Baby: RB LeVante Bellamy averages over six yards a carry in a timeshare with RB Jamauri Bogan. Bellamy has 190 carries for 1,172 yards and six touchdowns and has also added 24 receptions. Bogan, meanwhile, used the most for touchdown opportunities by scoring 15 times on just 156 carries. Both could be good plays fantasy in depending what you want. Bellamy gives you the yardage and receptions but Bogan gives you the scoring option.

Jamie: Both of these teams expected to be much better than they were this year. But that doesnt mean this can’t be a good game. BYU 40, Western Michigan 35

Kent: In this battle of starting freshman quarterbacks, the offenses may struggle at times. BYU has a much better defense and should be the determining factor in this one. BYU 27, Western Michigan 17

Chuck: The Broncos might find it hard to do their boat-rowing in Idaho against a tough BYU defense. BYU 28, Western Michigan 17