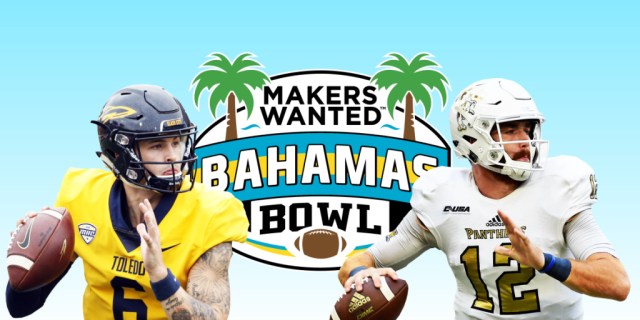 The Panthers surprised Conference USA in 2018, posting an 8-4 overall record, a 6-2 mark in conference and won six of their last eight games.

FIU is back in the postseason for the second consecutive year under Butch Davis. The Panthers went 8-5 in veteran coach Butch Davis’ debut last season but fell 28-3 to Temple in the Gasparilla Bowl. FIU followed up that strong 2017 campaign with another eight-win regular season, including a victory over C-USA East Division champ MTSU (24-21).

FIU’s pass defense enters this game ranked sixth in Conference USA in pass efficiency defense and held opponents to just 16 scores through the air. However, the Panthers didn’t face the the kind of passing attacks in conference that Toledo will employee.

FIU’s offense is headed by quarterback James Morgan, who is not a stranger to match-ups against Toledo. The Bowling Green graduate transfer tossed five touchdowns versus the Rockets in 2016 but did not play in last year’s clash. The junior had a solid debut for the Panthers this fall, as he connected on 65.3 percent of his throws for 2,727 yards and 26 touchdowns to just seven picks.

The Panthers haven’t won a bowl game since 2010 when the team won the now-Quick Lane Bowl. Oregon coach Mario Cristobal was FIU’s coach back then. A win would also mean a record nine on the year for FIU.

Key Player: QB Christian Alexander will be the starter as it was announced Thursday that Morgan will not play. The fellow junior will take Morgan’s place. Alexander is just 19-of-29 passing for 218 yards this season so how the in experienced signal caller will play will be the key to this game.

Fantasy Bonus Baby: WR Maurice Alexander is a converted quarterback who has turned into a multi-purpose weapon for the Panthers. Alexander moved to wide receiver after two seasons at quarterback and has become both a rushing and receiving threat. He has 17 carries for 110 yards and is second on the team with 35 catches for 444 yards. He also has six total touchdowns in 11 games. Look for him to be used a lot in this game and should be a great fantasy play.

The Rockets were picked to finish just behind Northern Illinois in the MAC West before the season started, and finished in a three-way tie for that spot with Eastern Michigan and Western Michigan.

The Rockets won the MAC title last fall but opened the year with several personnel voids to address, including at quarterback with the departure of Logan Woodside.

Coach Jason Candle’s team started the season at just 3-4, but the four defeats came at the hands of Miami, Fresno State, Buffalo and Eastern Michigan – all bowl teams. Toledo closed by winning four out of its last five match-ups, with its only loss coming to MAC champion Northern Illinois (38-15).

The Rockets maintained a high-powered attack that averaged 41.1 points a game and 6.2 yards a snap. Toledo has done it more with the run game–averaging 223.6 rushing yards a game and 5.3 yards per carry this season.

The Toledo defense, however, has been the liability this year as it gave up a whopping 30.2 points per game.

Key Players: Three RBs Bryant Koback (pictured above), Art Thompkins and Shakif Seymour have all split time in the backfield. Each has reached the 90-carry mark on the season, which helped stabilize the offense as the quarterback play has been erratic. The Rockets key will be to keep time of possession and these three backs should help do just that.

Fantasy Bonus Baby: WR Jon’Vea Johnson is Toledo’s deep threat receiver. His 29 catches are third in the team but he has 611 yards (second) and seven touchdowns (tied for second). He’s upped his yards per catch by nearly five to 21.1 in 2018 and has broken 100 receiving yards in a game just once in 2018. But he’s also averaged fewer than 13 yards per catch once in 2018 and has scored a touchdown in each of his last three games. Look for him to be a great fantasy play despite the poor quarterback play.

Jamie: The Bahamas Bowl has seen the wining team over 40 points in 3 of its four years of existence. That will continue this year. Toledo 44, FIU 37

Kent: Without Morgan, FIU will definitely not be as dynamic on offense. With the Toledo running game, I think they keep the time of possession away from its big defensive liability too. Toledo 45, FIU 35