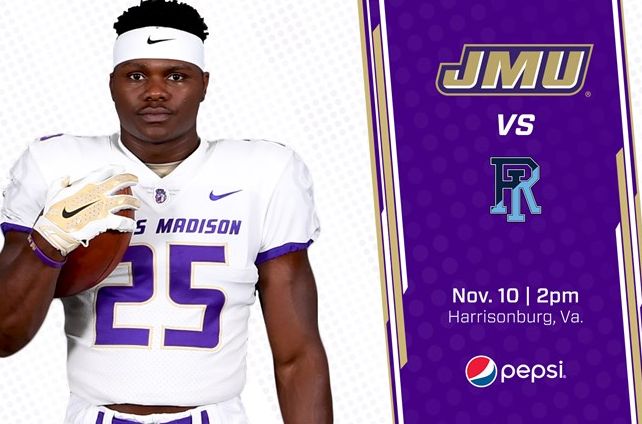 Rhode Island got JuJuan Lawson back in the lineup last week against Elon after missing four games due to injury. Lawson threw for 349 yards and 3 touchdowns but it was not enough to lead the Rams to victory. The Rams started the season 4-1 and looked like they could be the surprise team of the FCS. Since Lawson went down, Rhody has gone 1-3 and to a point where they probably cannot secure the surprise playoff berth they were on track for at the beginning of the season. The Rams finish the road portion of their schedule this week when they travel to James Madison.

The last time they played the Dukes in Harrisonburg, it was not pretty. The Dukes won 84-7. This version of Rhode Island is much different; they will be significantly more competitive this week. The key will be whether the Rams defense can hold up against the physical James Madison run game.

Key Player: QB JuJuan Lawson looked like he was on track to be the CAA offensive player of the year before going down with an injury late in the game against Harvard. Lawson came back strong last week with a big game. The key this week will be to protect the ball. Teams have shown they can hang with James Madison this year if they don’t turn the ball over and give the Dukes short fields. If Lawson can get out to an early lead, they may be able to fend off the Dukes who have not done great playing from behind this year.

Fantasy Bonus Baby: WR Isaiah Coulter is the number two receiver for the Rhode Island Rams. Coulter plays in the shadow of Aaron Parker. But this week, Parker should have his own shadow, JMU CB Jimmy Moreland. That means Coulter will be against the Dukes #2 corner most of the day which should give him some opportunities to make some catches and potentially find the end zone. The Dukes have been susceptible to the big play from time to time, but usually not to Moreland’s side. Coulter could hit a big play and wind up near 100 yards receiving

James Madison is looking to bounce back from its worst performance in the Mike Houston era this week against Rhode Island.

The Dukes fell behind 21-3 early after two interceptions were returned for touchdowns in the first half by New Hampshire. The Dukes never cleaned up their play, finishing the game with six turnovers.

James Madison is still in the thick of the playoff race and should get in, but they can ill afford anymore uneven performances like last week’s game.

Coach Houston has been tight lipped all week about who starts at quarterback this week after Ben Dinucci was replaced by Cole Johnson early in the game. The Dukes have not been able to get their run game going in the last few week, so that will be a focus for them early in this week’s game against Rhode Island.

The Dukes defense remains the strength of its team and will be tasked with shutting down JuJuan Lawson and Aaron Parker. Wins in the last two games will keep the Dukes in the seed conversation for the playoffs, but there is a lot of football to be played before getting to that point.

Key Player: LG Jahee Jackson has been suspended for the last five games. Whispers out of Harrisonburg say Jackson will be reinstated in time to play this Saturday. Jackson gives the Dukes a big body on the left side of the line. Its no secret that the Dukes’ running game deficiencies have been glaring since Jackson has been out of the lineup. If Jackson suits up, it stands to reason that Marcus Marshall, Cardon Johnson and Trai Sharpe are the automatic beneficiaries and they will see more holes to run through. If the Dukes are able to establish the run, it will allow them to set up the passing game to be successful. Teams have been daring the Dukes to throw and loading up the box, so a good run game this week is key.

Fantasy Bonus Baby: RB Marcus Marshall has to be hoping Jackson can play. For prediction purposes, we will say that Jackson is back this week. That will allow Marshall some better running games and allow him to use his speed in the second level. Marshall had been good for at least one big run earlier in the season and he will hit one this week of at least 50 yards for a touchdown

Fearless Prediction: Rhode Island is fighting for their playoff lives. James Madison is too, but its also senior day and they will be looking to reestablish themselves as a force in the FCS. Rhody visits Harrisonburg at the wrong time this weekend. James Madison 38, Rhode Island 10.