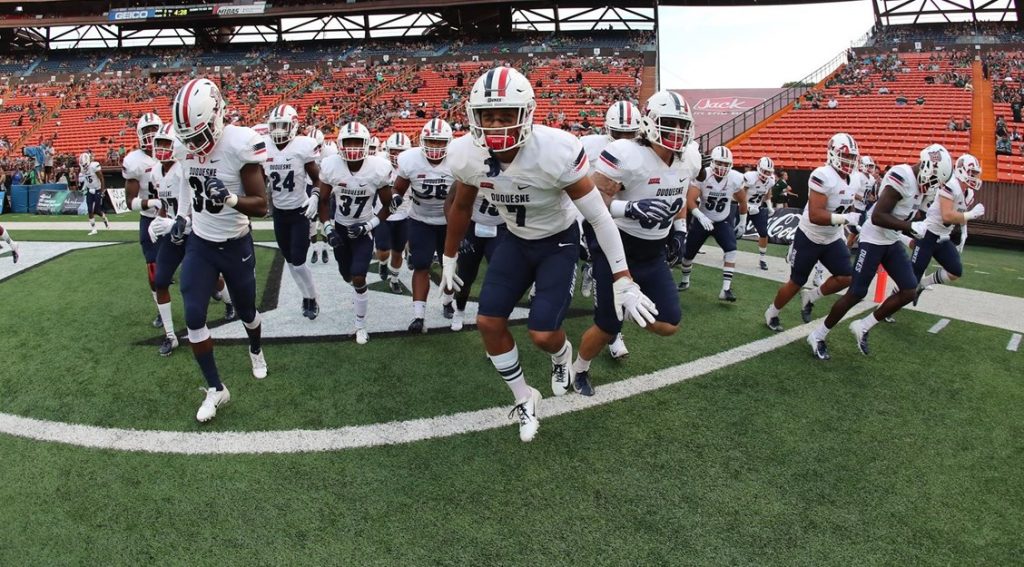 The Sacred Heart football team will look to clinch its third Northeast Conference title in six years on Saturday afternoon. The Pioneers (6-3, 4-0 NEC) will travel to take on Duquesne (6-3, 3-1 NEC), and can clinch at least a share of the NEC title, along with the conference’s automatic bid to the FCS Playoffs, with a victory.

Both teams enter the matchup riding three game-winning streaks and boast strong rushing attacks, with each team possessing a tailback ranked in the top six in the nation in rushing yards per game.

Fantasy Bonus Baby: The Sacred Heart offense has really taken off in their last three NEC games, and that’s in large part to the emergence of RB Julius Chestnut. He went over 150 yards rushing for the second straight week, with his 152-yard performance on Saturday.

He scored his lone touchdown this week on a 72-yard rush on the opening play of a drive early in the second quarter to give the Pioneers a 28-0 lead. He later added a 44-yard run, juking through several defenders then dragging several tacklers down to the nine-yard line to set up a field goal.

Chestnut has now scored four touchdowns over the last two games, three of which have gone for at least 62 yards.

After two straight contests on the road, Duquesne returns to Rooney Field for the home finale against first-place Sacred Heart on Saturday, Nov. 10.

The Dukes can win at least a share of the NEC crown and earn their first bid to the postseason since 2015 with victories over Sacred Heart and CCSU in the final two regular season games of the year.

Duquesne is riding a three-game winning streak after a 47-30 triumph at Wagner last Saturday. DU is 4-1 at home this season.

Key Player: Starring for the Dukes on offense is RB A.J. Hines, who last week tallied a season-high 232 yards with a touchdown in the win at Wagner, bringing his season total to . Hines leads the NEC, and sits 11th in the FCS with 11 rushing touchdowns on the season. He also is fifth in the country in rushing yards per game, averaging 123.3 yards per contest.

Fearless Prediction: Defense might be at a premium in this game, but the Pioneers seem to have just enough to give themselves the NEC autobid to the FCS Playoffs. Sacred Heart 35, Duquesne 24.