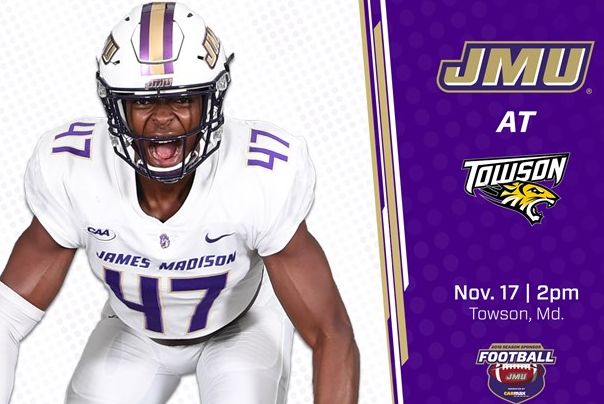 One week after getting pulled in the first quarter in an ugly loss to New Hampshire, James Madison quarterback Ben DiNucci had a great bounce back game in a big win over Rhode Island.

DiNucci threw for 227 yards and four touchdowns while running for 44 yards and another touchdown. Against Rhode Island, the Dukes ran for 192 yards and the offensive line played much better than it had over the previous few weeks. The Dukes were able to outpace a talented Rhode Island defense and will look to do the same thing this week against Towson on the road.

Towson has the best offense in the CAA, and it will be up to the James Madison defense to keep Tom Flacco in check and get the ball back to DiNucci and the offense.

This game is very important for the Dukes. While they have probably already secured a playoff berth with seven wins, a win over Towson will most likely allow the Dukes to grab a seed in the playoffs and a bye in the first round in their bid to return to Frisco for the third straight season.

Key Player: CB Jimmy Moreland is one of the few players remaining on the JMU roster that has actually played in a game against Towson. Moreland was not on the field in 2015 when the teams played, but he was a member of the Dukes team his freshman year in 2014 when he returned an interception 26 yards for a touchdown in an easy 62-7 win. All Moreland has done since then is become set school records for interceptions and interceptions returned for touchdowns. Last week against Rhode Island, Moreland pulled in his 18th career interception and may have returned it for his seventh pick six but for a stumble at the 20. Moreland will probably be tasked with covering Towson WR Shane Leatherbury to try to take that option away from Flacco and the Tigers offense. If Moreland keeps Leatherbury in check, the Dukes have a great shot to win the game.

Fantasy Bonus Baby: QB Ben DiNucci returned to his early season form against Rhode Island. He made decisions quickly in the pass and run game instead of hesitating or trying too hard to extend a play. DiNucci should have some success against an average Towson defense. He should eclipse 200 yards passing and 50 yards rushing. Look for DiNucci to also account for 3 touchdowns in a game where the score could get near the 40s.

Towson recovered from back to back losses by easily beating a wounded Elon team last week to keep themselves in the discussion for the CAA title and FCS playoff seed.

Tom Flacco paced the Tigers with 326 yards passing and three touchdowns in the win. The Tigers average 38 points and over 400 yards per game.

Their lowest offensive output against an FCS opponent was 28 points in a loss to Maine.

On defense the Tigers have giving up a number of big plays and have played in some shootout games. The Tigers have given up at least 27 points five times in ten games this year. To beat James Madison the defense is going to have to play better, as the Dukes will most likely be able to hold the Tigers closer to 28 points than 40. Like JMU, Towson has the opportunity to be in line for playoff seed with a win in this game. The Tigers are probably still in good shape for a playoff berth with a loss, but they would like to avoid putting themselves into the 7-4 bucket where a number of other teams will fall after Saturday’s action.

Key Player: WR Shane Leatherbury should be matched up for most of the day against James Madison corner Jimmy Moreland. This is the key matchup to watch all day. If Leatherbury can get open and make catches, the Tigers have a great chance to win this game. If Leatherbury is shut down and the Dukes defense has to only worry about one half of the field, it could be a long day for the Tigers. The numbers show that Leatherbury will have some measure of success this week either way. Coming into this week, he leads the Tigers with 56 catches, 787 yards and six touchdowns.

Fantasy Bonus Baby: QB Tom Flacco has the Tiger offense running at top gear late in the season. He has the ability to extend plays with his legs as well as make plays with his arm. Regardless of the outcome of the game, Flacco will have good stats at the end of the day. Flacco is susceptible to turning the ball over, with 11 interceptions on the year. He should throw for over 200 yards and account for at least two touchdowns in the game.

Fearless Prediction: This is a huge game and the winner may wind up seeded in the playoffs. James Madison will force a damaging turnover at some point in this game and secure the win. James Madison 34, Towson 24