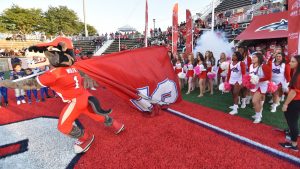 Rhode Island enters this weeks big CAA matchup with Stony Brook coming off its first conference loss of the season to Maine.

The Rams led the game most of the way until a back and forth fourth quarter ended with Maine PK Kenny Doak kicking a 39 yard field goal at the final gun. Even after starting quarterback JuJuan Lawson went down with a knee injury against Harvard, the Ram passing game has carried the load for the offense.

QB Vito Priore stepped in over the last two and a half games and continued to move the ball for the offense, relying on two of the top receivers in the CAA, Aaron Parker and Isaiah Coulter. THe Rams defense sometimes struggles to keep opposing offenses off the board, so most of their games have been high scoring. The defense has been aided by creating turnovers, recovering nine opponent fumbles, which is tops in the CAA. A win for Rhode Island would be their first ever against Stony Brook, who has won the first five meetings since joining the CAA in 2013.

Key Player: DE L.B. Mack III is having a strong season for the Rams defense. Mack has accumulated 36 tackles on the season including 9.5 for loss and six sacks. It will be imperative for Mack and his defensive line mates to clog the running lanes and keep Donald Liotine and Jordan Gowins from getting to the second level of the defense. The strength of the Stony Brook offense is on the ground. Stony Brook is last in the CAA in passing, so the Rams need to force the Seawolves into obvious passing downs. THe success of Ginnetti to clog the middle will go a long way in determining who will win the game.

Fantasy Bonus Baby: WR Aaron Parker is the leading receiver for Rhode Island. He already has six receiving touchdowns on the season to go along with 38 catches and 563 yards. The Rams have a balanced passing attack, but when a big catch is needed, Parker is usually the target. He should have some success against a strong Stony Brook defense. Look for Parker to eclipse the 100 yard mark and find the end zone this weekend.

As usual, the Seawolves were led by the ground game on offense with Donald Liotine gaining 163 yards on 32 carries.

The success of the run game allowed Joe Carbone to have to throw only 20 passes in the game. Carbone only connected on 10 of those passes, but two of them went for touchdowns. The Seawolves boast a very talented and tough defense. SO far this season, the defense has forced 15 turnovers – seven by interception and eight by fumble. In fact, every fumble the defense has forced has been recovered by Stony Brook. Of the 15 turnovers forced, the Seawolves have taken six of them in for touchdowns. Rhode Island will need to be wary of this very opportunistic group

Key Player: QB Joe Carbone seems to land in the key player group every week. Carbone is only completing about half of his passes, but he does protect the ball. He has only thrown three interceptions so far this season, which is the same number he threw in the regular season last year as well. Carbone has added 11 touchdowns through the air. The Seawolves will rely on their run game as much as possible but it will be up to Carbone to take advantage when he does have to throw. Stony Brook cant get into a shootout with Rhode Island so it will be imperative that they keep the chaines moving.

Fantasy Bonus Baby: RB Donald Liotine had a big game last week and is set up to have another big game this week against a below average Rhode Island defense. Jordan Gowins did not play last week and his status is still up in the air for this weekend. Look for Liotine to get the lion’s share of the carries and run for at least 150 yards. He did not find the end zone last week, but Liotine will score this weekend.

Fearless Prediction: This is one of those games that could go either way. Rhode Island will use the pass game to move the ball, while Stony Brook wants to control the clock with the run game. The game is at Stony Brook and they have the better defense, which gives them the slight edge in the game. Stony Brook 28, Rhode Island 27