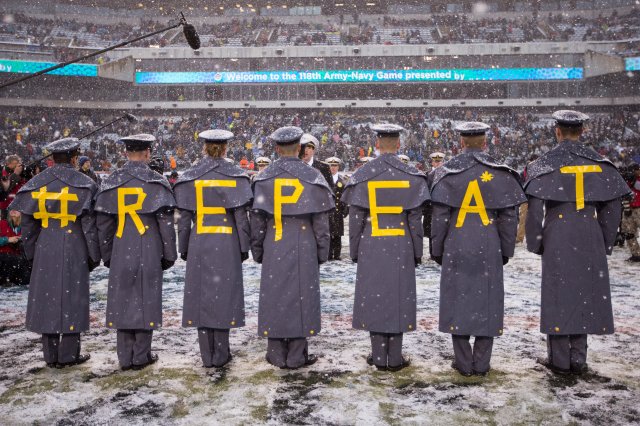 Season Recap: After a shocking victory over the eventual AAC East champs Memphis in September, the Midshipmen had some early promise for the 2018 season that was dashed by their inability to win on the road – Ken Niumatalolo‘s squad went 3-2 at Navy-Marine Corps Memorial Stadium, but went 0-6 away from home. Additionally, Navy has lost 12 straight and 14 of its last 16 games played away from home – the Midshipmen’s last win away from home was a 31-21 victory at Tulsa on Sept. 30, 2017.

Much of Navy’s woe came from a defense was giving up an average of 6.6 yards per play this season, but there has been some improvement in their last couple games against Tulsa and Tulane. The Golden Hurricane were stalled by Navy’s defense, while Navy’s passing attack, of all things, spurred an aborted comeback attempt versus the Green Wave. Navy fans have to be hoping that both units will come together to put together a complete effort versus their arch-rivals.

Key Player: S Sean Williams is Navy’s best defender with 77 tackles and 2 interceptions, though his role on Saturday will be more focused on stopping Army’s option attack rather than a dynamic passing game. A senior, he should be focused on what will be his final came as a member of the Navy football team.

Fantasy Bonus Baby: QB Malcolm Perry is where most of the Navy attack is funneled, with 1,035 yards rushing and 7 touchdowns. A junior and a 3 year starter, this speedy back knows what this game is about and little will take him by surprise.

Season Recap: In contrast to Navy, Army’s season has been one enjoyable weekend after another, riding a seven game winning streak and also already having accepted a bowl bid to play in the Lockheed Martin Armed Forces Bowl against Houston on December 22nd.

Head coach Jeff Monken’s gameplans are simple – compose grinding, clock-gnawing drives on offense, and shut things down on defense – and that combination has allowed the Black Knights to only allow a hair above 18 points per game and only 300 total yards per game on offense. Against fifth-ranked Oklahoma, Army held Heisman Award nominee QB Kyler Murray was held to 165 yards passing and 71 yards rushing – and needed overtime to beat the Black Knights.

Key Player: LB Cole Christiansen could be the heart and soul of the Army defense, with 65 tackles, 10 1/2 tackles for loss and 2 pass break-ups. Though the Cadets are a true team defense, look for the junior to be front and center in stuffing Navy’s attack.

Fantasy Bonus Baby: RB Darnell Woolfolk is the 5’9, 235 lb finisher of the Army offense, with 823 yards rushing at 14 TDs. He’s very likely to be the finishing touch on more than one scoring drive this Saturday.

Fearless Prediction: Contrary to what the records might try to tell you, this will not be a coronation for Army – despite the Black Knights’ propensity to chew clock, the times they’ve had problems is when they haven’t been able to make those drives turn into points, and if Navy can make them pay, Army can be had. This one is likely to come down to the wire – with Army just having enough to come out on top. Army 21, Navy 18