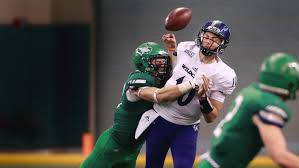 The Big Sky title race appears to be down to three teams, with two of them facing off this week in Eastern Washington at Cal Poly. This game looks like the last chance for an upset for the Eagles. EWU has on paper to be two relatively easy games to end the season as the Eagles host Idaho State before traveling to Portland State.

The other undefeated school in BSC play is North Dakota and the Fighting Hawks. This week UND travels to Northern Colorado before hosting Northern Arizona. UND has a bye in the last weekend.

If EWU gets by Cal Poly this week, it very well looks like a tie at the top with two undefeated teams in Big Sky play.

Here are the College Sports Journal’s Big Sky Conference Power Rankings for the week of 10/30/2016. (Last week’s ranking in parenthesis).

Cal Poly’s triple option running attack should provide the Eagles with their biggest test yet in BSC play.

The Fighting Hawks are two wins away from running the table. Two wins. UND has Northern Colorado this week before finishing at home against a streaking NAU team. Two wins and UND might just earn a Top 8 seed in the playoffs.

Cal Poly lost a close one to North Dakota and now get their chance at the other top team in the Big Sky. The clash of offenses collide with Cal Poly’s triple option running with EWU’s aerial assault.

NAU was off last week but has been impressive lately. A win in Ogden will look even more so.

This Week: vs. Northern Arizona

Weber State faces a tough NAU team this week after losing its first BSC game to UND last week. This is a game that WSU needs to stay in the playoff hunt.

This Week: vs. Idaho State

Montana has now lost two road games in a row to dip below the .500 mark within conference play. Luckily for the Grizzlies, they get Idaho State at home this week.

This Week: vs. North Dakota

The Bears face a must win against co-league leading UND this week. These two former North Central Conference rivals each are battling for its first ever DI playoff berth.

This Week: vs. Montana State

SUU has done well against the teams below it in the BSC standings but hasn’t been able to handle those above in the standings. I see why they are a .500 team this year in what will be considered a rebuilding year at seasons end.

The Vikings get a winnable game in Davis, California this week. This season has really been the opposite of last year. It is almost like what can go wrong next for this season, whereas everything went right a year ago.

This Week: vs. Portland State

The question will be if the bye for the Aggies will help it win a home game against the Vikings this week.

I really thought the Bengals could have been a sleeper team in the BSC this year. They proved me wrong and this week will see a very hungry Grizzlies team on the road. This one could get ugly early.

Sacramento State put a fight up last week against the Cal Poly in a typical Big Sky type of scoring game. This week, the Hornets are off to prepare for its last two contests.

Montana State is still winless in conference play so that makes them the only school in that category. Can the Bobcats win on the road in Cedar City to get out of that classification?