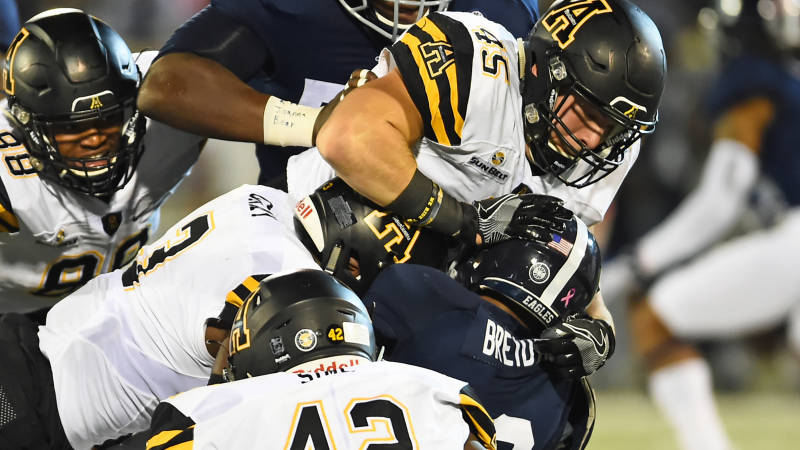 BOONE, N.C. — The coaching profession has taken Everett Withers a lot of places, but it will bring this former Appalachian State football star back to Kidd Brewer Stadium on Saturday.

Withers, the first-year coach at Texas State, will bring his struggling Bobcats back to a place where he helped ASU move into its modern football history with his play as a defensive back, linebacker and team captain for the 3:30 p.m. game.

Withers seemed awestruck during his weekly media conference this week to remember that it had been 1981 when he first settled in Boone. He played under three head coaches, Mike Working, Mack Brown and Sparky Woods, from 1981-84 and then got his coaching career started as a graduate assistant for Woods.

“You start looking at where (the App State) program started,” Withers reflected. “I came to this program in 1981 and the program was a lot like this one (at Texas State). The program was in a lot of disarray.”

But Withers arrived at a key point in Appalachian football history.

“In 1983, Appalachian State made the commitment to go out and hire Mack Brown,” Withers said. “From that point and time, the culture has changed there. We learned how to win.”

Since leaving Boone, Withers has had a couple of stints in the NFL, with the New Orleans Saints and Tennessee Titans, has kept the North Carolina program afloat after the Butch Davis scandals as the interim head coach, served as Urban Meyer’s assistant head coach at Ohio State and positioned James Madison for a couple of Football Championship Subdivision playoff runs.

Now he is looking to build the Texas State program with the model of his alma mater in mind.

Withers told the story this week of coming back to see a game on the ASU campus for “the first time in 30 years’ in 2014 when James Madison had a bye week.

“They got their pants blown off by South Alabama,” Withers remembers of a 47-21 Mountaineer loss — a defeat that occurred just two weeks before Appalachian started a winning streak that has now stretched to 23 victories in the Mountaineers’ past 27 games.

“Before they went FBS, they made the plans to go FBS,” said this proud alum. “They have done things the right way. As good a transition as I have seen made.”

Withers took over a Texas State program that stumbled to a 3-9 overall record last season — including 2-6 in the Sun Belt — and fired coach Dennis Franchione with little left in the proverbially cupboard.

Since beating ASU’s 2015 Camellia Bowl opponent Ohio University 56-54 in triple overtime on the opening weekend of the season, the Bobcats have dropped five of six games, including three in a row in Sun Belt play.

The latest loss was two weeks ago at home against Louisiana-Lafayette, which throttled TSU 27-3 a game after the Ragin Cajuns had lost to ASU 24-0.

Withers knows things won’t be any easier this Saturday against his alma mater.

“The number one thing you see is how hard (the Mountaineers) play,” Withers said. “They don’t do a lot of complicated stuff. It will be great for our kids to go into that kind of environment.”

For Appalachian, the challenge will probably be more mental than physical on Saturday as the Mountaineers come off a 34-10 road win against arch-rival Georgia Southern last week on ESPNU.

“The goal is to continue playing like we’ve been playing,” said ASU coach Scott Satterfield. “Our players do a good job of playing one week at a time.”

While Texas State players are trying to impress Withers and build for the future, the Mountaineers have a more immediate picture in mind — winning the Sun Belt title that narrowly eluded them last season.

At 6-2 overall and 4-0 in conference action, Appalachian is halfway through its league schedule and is determined not to let a November skid derail it for the second year in a row after that Georgia Southern showdown.

“We kind of lost focus,” ASU quarterback Taylor Lamb said. “If you look at it, it was a tough schedule last year (playing three times in 14 days, with two Thursday night contests and a triple-overtime game in between). We’re trying to keep that focus the whole season.”

Everyone on the Appalachian roster knows what is in play.

“We have four games to get a ring,” said Lamb. “We have to remember what the goal is — winning the Sun Belt Conference.”