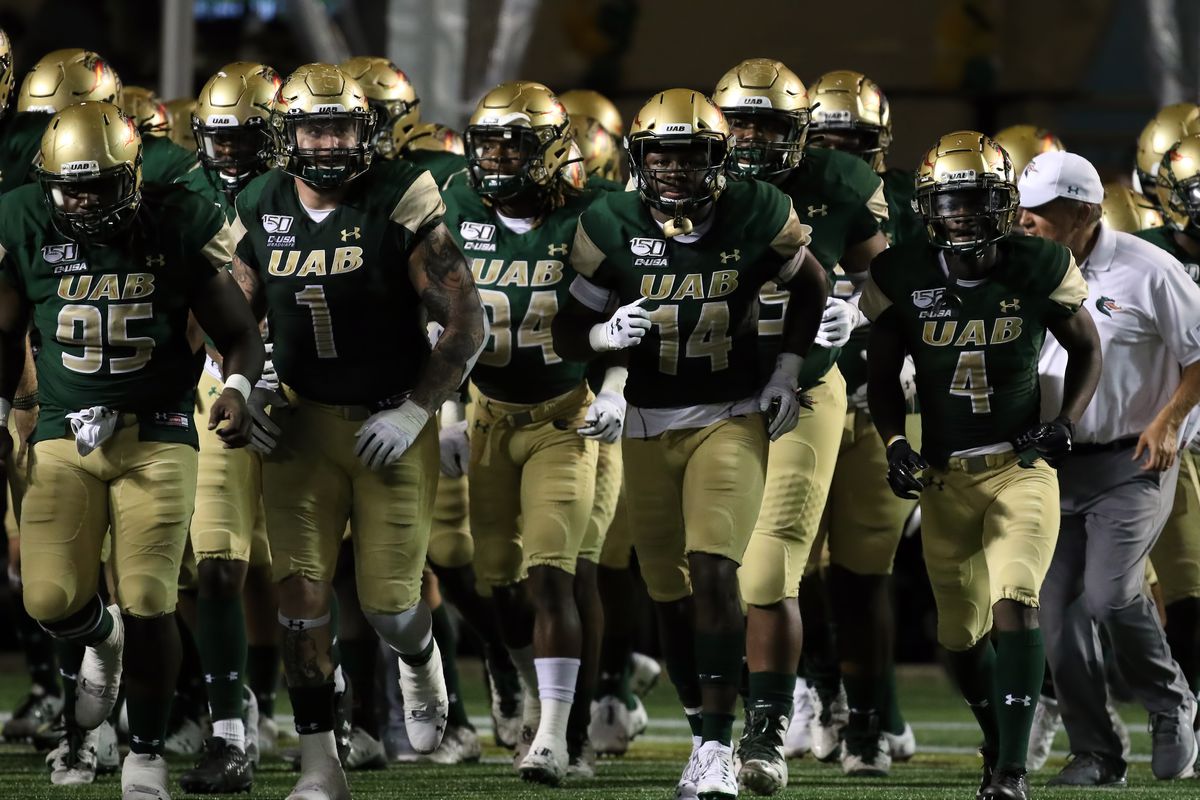 Season Recap:UAB, the reigning Conference USA Champion, looks to win back-to-back titles on Saturday when the Blazers visit Florida Atlantic for this year’s Conference USA Championship. UAB defeated North Texas 26-21 in the regular season finale to claim its second-consecutive C-USA West Division title. Just like last year, the Blazers finished the regular season with a 9-3 overall record. UAB was the first team in C-USA history to win the title on the road last season when it won at Middle Tennessee State and looks to once again this year.

The Blazers have relied on their defense all season, and they stepped up big in a must-win situation at North Texas with seven sacks, 11 TFL, two interceptions (one returned for the game winning touchdown) and held the Mean Green to just 21 rushing yards. UAB finished the regular season ranked fifth nationally in total defense (269.8 yards), and also ranks third nationally in fumble recoveries (13), fourth in third down defense (.275), fifth in rushing defense (92.3), sixth in sacks per game (3.58), sixth in passing defense (177.5) and eighth in tackles for loss per game (8.2).

LBs Kristopher Moll, Noah Wilder and Jordan Smith set the tone for the defense. Smith leads the team with 10 sacks, while Moll has nine and has forced four fumbles. Smith also is the leading tackler with 88, while Wilder is second with 73.

Despite not fielding a football team in 2015 and 2016, the Blazers have been incredibly successful since their return and have compiled a record of 28-11 overall in that span.

Key Player: RB Spencer Brown has been honestly a bit of a disappointment this year as he has been out with several injuries. He was expected to be the leading rusher but has only had one game where he has hit the century mark. Luckily, however, for the Blazers that game was in the last contest against North Texas. With QB Tyler Johnston’s struggles in taking care of the ball this year, expect the Blazers to use Brown on the ground to control the clock and use its strong defense to be the key to defeating FAU. Season Recap: FAU’s has accomplished great feats in the last three seasons. They underwent a coaching change and miraculously ended up with Lane Kiffin. In his debut season, Kiffin dominated C-USA with an undefeated season and C-USA Championship. The Owls also won 11 games, a school record for FAU in 2017. The Owls failed to meet expectations last season (5-7) but this year’s team bounced back with another C-USA east title, Kiffin’s second in three years on the job.

FAU started the season with two blowout losses to Ohio State and Central Florida but only have lost one game since (four week ago at Marshall).

The Owls lead C-USA in scoring offense with 34 points per game and also first in turnovers forced, which ranks FAU among the nation’s best with 19 interceptions. FAU averages 31 points per game at home in FAU Stadium.

CB Meiko Dotson is tied for the top spot in the nation with eight interceptions, while fellow CB James Pierre and LB Akileis Leroy have three apiece. Leroy also leads the team with 94 tackles.

These two conference teams ironically have not met in quite some time–2014 to exact. The Blazers won that contest but FAU holds a 4-2 series lead.

Key Player: QB Chris Robison threw for only 156 yards, but had three touchdown passes in a 34-17 win against Southern Miss last Saturday. Robison has thrown for 3,129 yards and 22 touchdowns this season, and senior TE Harrison Bryant has been his top target, catching 61 passes for 965 yards and six touchdowns. Look for UAB to first try to stop the passing game, especiall to Bryant and Robison will need to find other targets as a key to an Owl victory.

Fearless Prediction: Both teams this week have had to deal with their coaches being courted by Power Five schools (Kiffin for FAU and Bill Clark for UAB). Those distractions should not lead to much difference in this game. FAU has the stronger roster and also has the home field advantage. But UAB’s defense has shown it can get off the field quickly. However, I think FAU has too much firepower for them to be denied in this game. Florida Atlantic 31 Alabama-Birmingham 17